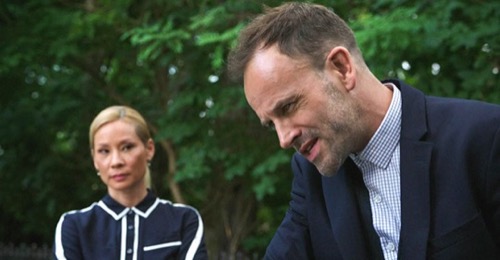 Tonight the CBS series Elementary airs with an all-new Thursday, June 6, 2018, season 7 episode 3 and we have your Elementary recap below. On tonight’s episode called, “The Price of Admission” as per the CBS synopsis, “Holmes takes extreme measures to secure his return to New York when he leans on his father’s disreputable connections to aid his legal re-entry into the U.S.

Also, while Holmes looks for a way back to the U.S., Watson helps the NYPD investigate a murder at storage facility that caters to wealthy clients with items they want to be hidden from U.S. Customs.”

Two associates at an storage facility for the rich and shady discover their boss Virgil dead on the floor behind a large art piece after he has been missing all day. Sherlock is called in by one of the men who knows his father.

On the scene, Sherlock is irritated but looks around. He discovers the cameras where shut off and that the man didn’t die in the room where they found him. In a nearby space, Sherlock finds the man’s dental crown, the location of where Virgil was killed and then dragged. He calls Joan to tell her.

Sherlock and Joan meet up at home. He has had the furniture brought back in. Joan is impressed. They get to work talking about the case. They think it must have been an inside job. Marcus calls. Joan meets him at the storage site where a client allows them to look at his unit. After they get inside, they discover the locks on his cabinets within the unit were picked by nothing was taken.

In front of the house, Marcus makes up a story that he needs to print something off in Joan’s house. She tries to make an excuse as to why he can’t come in. He tells her he knows Sherlock is inside. She tells him he is right. They head in. Marcus hugs Sherlock. Its been a year since they have seen each other. After some small talk they get into the case. Sherlock thinks Virgil was going through units looking for secrets to use as leverage against their clients and shake them down.

Sherlock and Marcus head into the precinct to meet the new acting chief while Gregson is in the hospital. The acting chief keeps things brief, making their work easier on them. They head back to the brownstone to see Sherlock. Sherlock has a suspect in mind named Aura Swenson who deals in art.

Sherlock and Joan visit Aura’s appraiser. He tells them she asked him to forge documents on items that were looted. He refused her. Just then, Marcus gets a call that Aura has agreed to have her unit looked over. They head there where Aura and her lawyer tell them she just brokered a deal (a peace treaty) with the Ethiopian government, in turn they donated the items for her support of their infrastructure.

Meanwhile, Sherlock heads to the Ethiopian consul but the official he looks to speak with his whisked away. He calls Joan. After hearing what just happened she comes to the conclusion that the Swenson collection had a journal in it dating back to the 20s that may have provided proof of properties with oil on its land between Ethiopia and Eritrea. They head to meet an official for Ethiopia where they propose to her that Virgil may have been killed because he knew of the journal and the oil. She denies it all. They believe her and meet with Sherlock who agrees. He thinks back, maybe it was Aura’s appraiser who did it.

Sherlock and Joan bring him to the precinct to question him. He scoffs at them. Later, Sherlock pays him a visit. He knows the appraiser didn’t kill Virgil, another man was hired by the government to do it. Sherlock scares him into confessing and he does.

Back at home, Sherlock gets a text from the FBI field agent he blackmailed. The agent pinned Michael Rowan’s murder on an inmate who then took his own life in his cell. Angry, Sherlock finds the agent who threatens to expose him if he ever calls or contacts him in any way again.