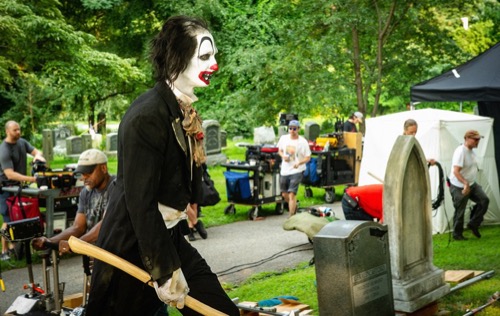 Tonight the CBS series Elementary airs with an all-new Thursday, June 13, 2019, season 7 episode 4 and we have your Elementary recap below. On tonight’s episode called, “Red Light, Green Light” as per the CBS synopsis, “An explosion at a traffic stop puts Holmes and Watson on two separate tracks of investigation as they try to determine whether the attack was gang-related or a terrorist attack.

Also, Holmes and Watson suspect there is more for them to discover regarding the recent attack on someone within their inner circle.”

Sherlock has a dream he is at the funeral of Gregson. The new captain offers his sympathy before a crazy clown kills him. Sherlock wakes.

Sherlock visits Gregson. He is awake. He starts to apologize to Sherlock but he isn’t hearing it. He wants to look forward. The past is over. Gregson smiles.

It’s night. Three women are walking when they see a crash. One woman, a nurse, runs to help. The truck blows up. Later, Marcus and Joan arrive on the scene. It looks like a bomb was responsible. The person used gas. Maybe it is related to Patrick Meers? They head on the other side of the scene to see Sherlock looking at the victim. Sherlock thinks this is the work of 2 rival gangs, specifically Mara Tres, a violent gang. They head home. The captain texts. Joan heads to meet him. Sherlock is headed to find a member of Mara he knows.

Gregson tells Joan that Meers and he spoke and then Meers shot him 24 hours later. Joan thought it all happened in one day. Meanwhile, Sherlock finds a member of Mara coaching kids at a soccer field. He shares with Sherlock that he has been out of the life for 2 years now and he is tattoo free. He now lives under the name Danny. Sherlock tells him about the bombing. Danny doesn’t want to get involved.

Later, Danny tells Sherlock form what he has learned, the driver of the van was skimming fuel and selling it. They head too much on the truck when it was struck.

Sherlock and Joan meet with the terror task force and accuse them of being the terrorist behind the bombing. The room of suits is in shock. They leave. The acting captain is upset. They share that they accused the Feds to rule out their suspects. One of the Feds stays. She thinks they are on to something. They sit and talk with her. She thinks they are right – someone has rigged the city traffic lights to make a getaway. She offers them a handler’s name, “Overlord.”

Back at home, they talk about the case. Joan tells Sherlock she thinks Meers was trying to buy an accomplice some time.

Marcus meets with a rep from the transportation department. He gives Marcus some files.

Joan pays Meers a visit. He won’t budge or share anything, denying he is protecting anyone. Back at home, Sherlock has tracked down a hacker who knows the Overlord. He is now working for the authorities to avoid prison. Sherlock has him look through the DOTs files.

Sherlock realizes the hacker was after the other driver. He and Marcus meet with the driver who says he has no enemies. They wonder what his truck was carrying. He doesn’t know. Marcus talks to the owner of the cargo, a construction company owner. He was carrying elevators. As their talks develop, Marcus realizes that the man’s son in law is a member of Mara Tres. He calls Sherlock who got a call and is at the morgue with a member of the gang who was gunned down.

Danny calls. He has some dirt. The member was gunned down because he got one of them killed in the crash. Sherlock thinks there is a more powerful person behind this all pulling the strings.

Marcus and Sherlock meet with the victim’s father in law. They accuse him of having a mole at the company that manufactures the elevators and that he set this whole thing up. He confesses after trying to dodge their accusations.

Meers wife pays him a visit and shares she was visited by Joan. She showed Joan Meer’s video games. The wife asks Meers if this is how he talks with the terrorists. He does, he tells her before asking her if she can be brave.