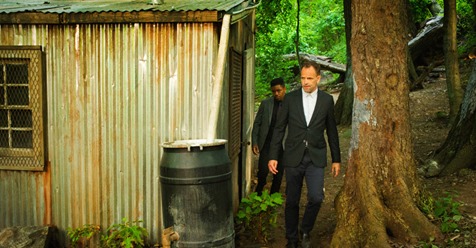 Tonight the CBS series Elementary airs with an all-new Thursday, June 20, 2019, season 7 episode 5 and we have your Elementary recap below. On tonight’s episode called, “Into the Woods” as per the CBS synopsis, “Tech billionaire Odin Reichenbach hires Holmes and Watson to investigate a personal threat he suspects originated from within his own company. Also, Holmes and Watson search for a motive behind three seemingly unconnected murders.”

Joan is watching video of a gentleman who donated to her gun buyback program. He wants to meet her, she tells Sherlock. She is doing a little homework on him in advance. Meanwhile, a woman running in a triathlon collapses on the ground. A knife is in her back. Her friends rush to her side.

Marcus arrives on the scene and speaks to the victim’s roommate. It looks like the woman was attacked while running. Marcus learns that there is 3,000 acres or so and there is no actual course, just forest. He and Sherlock take a walk. Sherlock thinks he can narrow down the location.

Marcus and Sherlock find a shack. There is blood and foot prints but none appear to belong to the woman. There is another victim and that person is most likely dead judging by the claw marks to the pond.

Joan heads out to meet the man who contributed to her fund. He admits that he contributed so he could meet her and Sherlock. Someone has threatened to kidnap his niece who is 16 years old and he believes they work for him. He gives her some of the letters. She heads home to show Sherlock who isn’t thrilled about the job. Marcus calls. They head to the coroner’s office. Two bodies where discovered in the pond. One of them is a hog.

Joan runs their theory regarding the three victims by the acting chief. She believes a bootlegger named Renny was in the shack making moonshine by gun point. The killer tested it on the hog and when the runner went by she must have heard something so he stabbed her. Meanwhile, Marcus heads to a bar to get some information on Renny’s boss.

Sherlock and Joan meet with her contributor, Odker. They go through the employees computers and files now that everyone has gone home.

Marcus calls Joan and Sherlock. The prints they found on a wine bottle in the shack belong to a high end wine dealer. They head to his home but he doesn’t answer. They find him in the wine cellar on the floor with a gunshot wound.

Later, Marcus and Joan meet with the wine dealer. He is alive after being shot in the mandible. He communicates by computer. An intruder wanted just one of his wines in his collection. He never saw the killer’s face. They discover the killer is trying to poison someone. Joan thinks she knows who the target is. A man named Jason Woods, who works with hedge funds. They head to meet him and his wife to tell him. They think they can catch their killer at a wine event that night.

The Woods arrive at the event with Joan and Sherlock. After their computer signal is jammed Marcus announces to the entire room that he is locking the door. The event has just become a crime scene. Shortly after, they recognize a man that was tending bar at Renny’s place of employment. They take him in. He confesses. They learn that he has been obsessed with Jason’s wife for a longtime and wanted Jason out of the way.

Joan and Sherlock realize their contributor has ties to Patrick Meers and he has sent then on a wild goose chase.