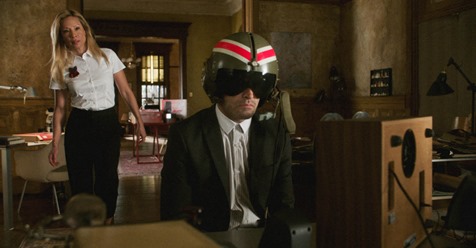 Tonight the CBS series Elementary airs with an all-new Thursday, June 27, 2019, season 7 episode 6 and we have your Elementary recap below. On tonight’s episode called, “Command: Delete” as per the CBS synopsis, “Tech billionaire Odin Reichenbach presents Holmes and Watson with an extraordinary offer to help him with a program that can predict future crimes.

Also, Holmes and Watson assist Bell when he tries to prevent a future crime of his own, as he races to locate a fellow NYPD officer planning a sniper shooting.”

Sherlock and Joan talk to their latest client. He has been using his platform to look for criminals and stop their potential acts of violence. He wants Sherlock and Joan to help. Sherlock isn’t so sure, he is breaking the terms of his users’ privacy and then taking action on his own without alerting the authorities.

Marcus is visiting the home of a colleague, a former sniper, named Davis who has gone missing with a rifle. He questions the man’s significant other who shares that Davis has PTSD.

Sherlock and Joan decide they do not want to work for their new client and need to keep an eye on him. They decide not to tell Marcus and the rest of the precinct. Joan heads to meet Marcus to work the Davis case.

Later, Sherlock, Joan and Marcus arrive at the morgue to see three bodies. One of them is the client who was being kept safe. A man named Baron. His apartment had been broken into weeks before. They discover a pill on him they discover is a trial drug for a pancreas disorder. They visit his doctor who admits he was studying Baron due to his increased muscle mass and no fat even though he had a pancreas issue.

Sherlock comes home to find the NSA rep waiting for him. He needs more on Sherlock and Joan’s client.

Joan and Marcus bring Baron’s mother in. She tells them how someone recently broke into her house and stole her son’s medical files. They think this person did it so they could develop a drug off of baron’s mutation; more muscle than fat.

Marcus shows the chief pictures of Baron with some of his family. Sherlock has a friend who identifies the foliage in the photos where taken in Guatemala. Baron stood to inherit some of the land. Maybe an heir killed him and not a doctor for his mutation.

Sherlock meets with he and Joan’s new client. Sherlock tells him he will only help if he can vet the cases 100%.

Marcus and Joan speak with a woman from the consulate. She tells them no one ever came forward claiming the Guatemala land. Although a doctor did call her last year with a patient she couldn’t identify that shared the same condition as that of the family. She couldn’t share that it was Baron though due to HIPPA.

Joan and Marcus call in Baron’s doctor’s nurse. She knew about Baron and it seems she is pregnant with Baron’s child. She blackmailed Davis to do all her dirty work.

Sherlock realizes the NSA is in their client’s pocket. The NSA rep threatens him, Joan and everyone that matters to them unless Sherlock stays out of his way. Sherlock chooses not to tell Joan.