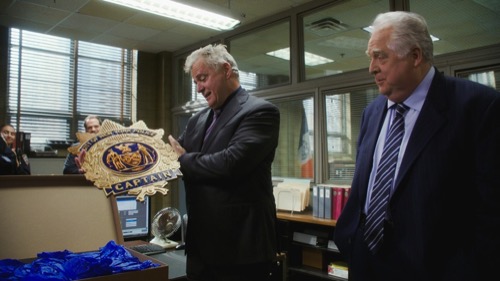 Also, when Captain Gregson resumes leadership of the precinct, he suspects his interim replacement, Captain Dwyer, is responsible for one of his best detective’s suspicious departure.”

Captain Dwyer is giving a speech to the precinct about he and Gregson’s longtime friendship. He turns the 11th back to Gregson.

Gregson returns to his office. Bree comes in and gives her notice. She is headed to the private sector. Gregson isn’t happy. She is one of his best. Meanwhile, a robber calls his girlfriend. He scored big he tells her, inviting her over. When she arrives she finds a trail of money leading to her boyfriend who is dead in bed.

Joan, Sherlock, and Marcus go over the thief’s death as they look over his body. He appears he died from a contact high as there was fentanyl on the cash he stole from a stash house. He also had blood on his gun. They need to find who is making the fentanyl and shut them down.

Joan and Gregson question the thief’s girlfriend. She shares that Ridley never used drugs. He made her get clean when she was addicted to meth.

Sherlock goes through Ridley’s apartment trash while Marcus talks to him about missing Gregson’s welcome back party. Meanwhile, Gregson asks Joan in private what she thought of Dwyer. Bree is leaving and he thinks Dwyer made have been inappropriate. He has a reputation for that. Joan tells him she didn’t see anything bad happen. Joan tells him to confront Dwyer.

At home, Joan asks Sherlock what he thinks and may have seen with Dwyer. He tells her nothing. She gives him Ridley’s files. Sherlock has an idea. He heads back to the apartment with Marcus. He finds Ridley’s inhaler. Someone planted cat hair in his apartment so he would use it. It tests positive for fentanyl.

Marcus and Joan tell Gregson about how Ridley was murdered. They share that Ridley may have been a spy as the Russians used fentanyl kolokol-1 to kill previously.

Sherlock visits a school where he questions a teacher. He talks to her in the hall in private. She is a spy from Moscow. He asks her if she knows Ridley. She does not. He needs information or he will out her.

Gregson meets with Dwyer at a local pub. He asks him what he did to Bree. Dwyer is outraged. He did nothing wrong. He storms out. Marcus calls. He is at the morgue. He is looking at the body of the man (Cecil) Ridley shot. They found him in Dyker Heights nowhere near a stash house. Maybe the Russians asked Ridley to kill the man and then tipped him off about the stash house for payment.

Joan and Marcus meet with an art colleague of Cecil. She doesn’t know anything about why a foreign government would want him dead. Sherlock finds a burner phone in Cecil’s desk with texts and an address. They head there.

Inside the building they find Ridley’s foot prints. It looks like Cecil sent him there.

Sherlock meets with his Russian spy at an outside cafe. She shares that a scientist from Russia who helped create kolokol-1 lives in New York. He is rumored to recently cook up a batch. She points to an apartment nearby. Sherlock notices she signals someone. The apartment blows up. She tells him it wasn’t her call.

Gregson meets with Bree. She admits Dwyer is the problem but taking him down does nothing. It will happen again. If she goes public she will be harassed and lose a lot of her cop friends. She would rather move on.

Unsure of where to go from here, Joan and Sherlock head to the DEA. Before they even meet with anyone Joan sees documents on cash seizure protocols. She thinks she has the answer.

Sherlock, Joan and Marcus surprise Cecil’s colleague. They know she and Cecil were behind Ridley’s death. Her company won the bid from the DEA to launder seized money. When reports came out that toxic money may be a myth they set up Ridley so they could ensure their work with the DEA. They also know she has a cat and the hair in Ridley’s apartment will most likely match. And when they talk to her bank they are sure she withdrew a lot of money. Her silence is everything.

Bree comes to see Gregson. She filed a complaint against Dwyer at the EEO. But she still plans to move on to the private sector. Gregson tells her he will always be here cop friend.