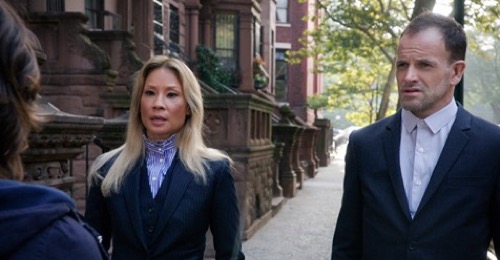 Tonight the CBS series Elementary airs with an all-new Thursday, July 11, 2019, season 7 episode 8 and we have your Elementary recap below. On tonight’s Elementary season 7 episode 8 called, “Miss Understood” as per the CBS synopsis, “Holmes and Watson search for an ulterior motive when Cassie Lenue (Allie Ioannides), a brilliant young criminal they helped put in prison, seeks their help in solving a murder.”

Marcus brings a Mr. Weller in. He has been in three times for the investigation of a woman named Summer Voss. He is brought into a room with Sherlock and Joan. They know he killed her with a yoga ball. They state their case and he is booked. On their way home, they find Cassie in front of their home. A young woman who pretended to be an adducted daughter of a well off family. She beat the charges and now she needs their help. Someone she cares about was murdered. She wants to hire them to solve it.

Cassie tells them about her foster mom Heather who was gunned down. She cared for her and wants justice. Joan visits Marcus. Heather’s husband was a suspect but has since been cleared. Meanwhile, Sherlock tells Cassie she can stay with them and they will track her location.

Sherlock brings Cassie to work the case. He is able to read some of Heather’s emails between her and a buyer. When they come outside of Heather’s house the State Police is there. They are working the case on stolen baby formula. Heather was an informant. It may have gotten her killed.

They all head back to the office and speak with Gregson. The State Police need help. Meanwhile, Sherlock asks Cassie about an agent’s blood in her car years prior. She asks him about his childhood.

The next day, Sherlock visits the halfway house where Cassie was. The mother of the home tells him she didn’t fit in and searched the web a lot for crime blotter stories.

At the station, Cassie and Joan watch an interrogation of a woman who they think may have harmed Heather. Cassie tells Joan Sherlock is her long lost father. Joan laughs.

Back at home, Sherlock tells Joan he has discovered Cassie is targeting them. He brings Cassie in and tells her she came here for a connection, she’s lonely. She tries to lie and then admits that Sherlock is different. He talks to her about trying to become a better person.

Joan tells the State Police working the case that they should be looking at store cameras. Sherlock and Cassie head to a local grocery store and watch the cameras. Sherlock thinks he has a theory after hearing the state was contemplating taking formula out of a program that helps less fortunate mothers.

At home, Sherlock tells Joan he thinks he has narrowed their suspect down to a Mr. Leehoven, a supermarket big wig. Hours later, Leehoven wakes to his house alarm. Cassie has let herself in. She startles him, telling him he had Heather murdered. She won’t say anything for $2 million.

Cassie sneaks back into the house and finds Sherlock hiding. She tells him she set up a meeting to take Leehoven’s money. He is after all too delicate to have killed Heather. He has a fixer.

The next day after the meeting, Joan and Marcus tell Gregson they took down Leehoven’s fixer. It was Sherlock and Cassie’s idea.

At home, Sherlock returns. He has Cassie’s real name in the envelope. She doesn’t want to see it if it is a sad story. Good, he tells her. In the envelope is an application to change her name to anything she wants.