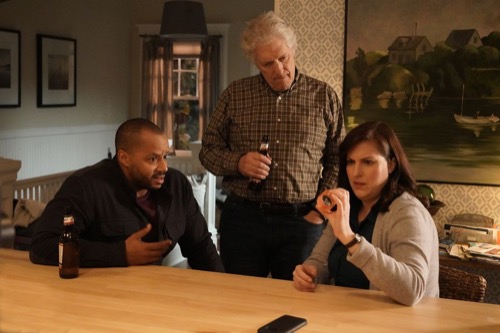 Tonight on ABC Emergence airs with an all-new Tuesday, December 10, 2019, season 1 episode 9 Fall Finale called, “Where You Belong,” and we have your Emergence recap below. On tonight’s Emergence season 1 episode 9 as per the ABC synopsis, “Jo and Chris must evade the FBI as they investigate an elusive group of cyber terrorists.

Ed’s presented with a cancer treatment that seems too good to be true, and a mysterious woman’s attempt to reach Piper puts the entire Evans family in danger.”

Mia has questions. She saw Piper light up and now she knows she isn’t human, so of course she has questions. She also wasn’t alone. They all saw what happened to Piper after she put on that disk and they had needed an explanation. Jo was the only one that could give them one. She told them all that Piper is an AI and at first they were skeptical. They couldn’t believe that the little girl wasn’t human. She looks human and no one had ever heard of technology so advanced for someone like Piper to even exist.

Yet, here she is. She exists and the fact that is possible had blown their minds. The adults had needed time to adjust. Mia was the exception. She was fine with Piper being a robot and she told the rest of them not to make a big deal out of it. Mia had long since accepted Piper as being different. Her finding out the facts hadn’t changed anything and so she told the adults to get over it. They in turned tried to. Jo later talked to Piper and Piper finally told her about cutting that thing out of her neck.

Jo warned her against doing that again. She also enacted a “no knives” policy and that was that. Piper wanted to be like everyone else. She didn’t want to be treated differently and thankfully she had Jo who accepted her as she is. Jo was fine with everyone knowing as long as it was the right people that knew the truth. The FBI was still sniffing around for instance. They wanted Jo to answer some questions and so she tried ghosting them in hope they would go away. And that just made Agent Ryan Brooks crafty.

He later approached Benny. Brooks asked about the article on Richard Kindred and he also wanted to know how it was connected to Jo adopting a little girl. Benny claimed there was no connection. He said he was simply doing a friend a favor by trying to locate the little girl’s family and Brooks pretended that he was checking things out in the area. They were both lying, but for different reasons and so eventually Jo was going to have to deal with that problem on her own. Which was a little hard to do what with everything that was happening.

Ed was referred to a medical trial. He thought the trial would help him with cancer and so he met with the woman that was supposedly running it. She had basically promised him a cure. She told him that they could give the best chances of surviving and the price of their trial was Piper. This shadowy organization wanted the AI. Ed had walked away from the offer and her later told Jo what happened. She tried to find this woman on her own and her ex in the meanwhile decided to directly confront the problem.

Luckily, Alex later roped Jo in. He met with this woman calling herself Helen and he asked her why she wanted Piper. All Helen could say is that Piper was data stolen from them. She didn’t say who this “them” were and she didn’t want to go in details of what they were going to do with Piper once they supposedly get her. Alex then reported everything Helen said to Jo. They talked about it and Jo believes Helen was a part of this group called Splinter. She believed Splinter was responsible for some of the crap and she knows that the FBI has been looking into this group.

Brooks was especially investigating this group. He and other agents have a file that goes back fifteen years on Splinter. Therefore, Jo decided to finally return his calls because she knew he would be interested in Helen. She went to his office and she pretended not to know what Emily has been saying about Piper being dead and not human. She did however tell him that Splinter approached them and that they wanted Piper in return for helping her father with his cancer. Jo even convinced Brooks that they could capture someone from the group in a sting operation involving Alex.

Jo was going to have her ex meet with Helen again. It was supposed to be out in the open and safe because Alex was wearing a bulletproof vest. Alex even wanted to do it. He said he wanted to bring the fight to them and so they had put everything in place. It was all set for Helen to come to him except she changed things at the last minute. Helen suddenly asked that he meet her by a boat and she asked that he leave the comfort of car. Jo had wanted to put an end to it when she heard that. She no longer believed it was safe and so she told Alex to drive away.

It was Alex that decided to stay. He left the car and he asked Helen to come out. She said she wanted to see the little girl first, but when Alex claimed Piper was in the car, Helen chose to drive off. She was driving away and so Jo’s team cut her off. They wanted to arrest her. They were willing to let her talk in her own defense and all Helen could say is that Piper didn’t belong with Jo’s family. They then jumped off a bridge to escape the authorities and so Brooks was forced to call a search and rescue.

Brooks told Jo he has this. He told her its best if she goes check on her family and so Jo called Benny to tell him to bring her family to the station. She later got to the station and found Mia and her father and there was no Benny. Benny had told the others that he was bringing Piper to Jo and now he can’t be reached. He’s checked out of his hotel and his phone was disconnected. Benny seems to have run off with Piper and the best Jo could do was put out an APB.

And unfortunately that was too late because Benny took Piper to Helen where he dampened her powers with a bracelet.

And that wasn’t all, Benny and Piper revealed that they were just like her when they managed to glow too!