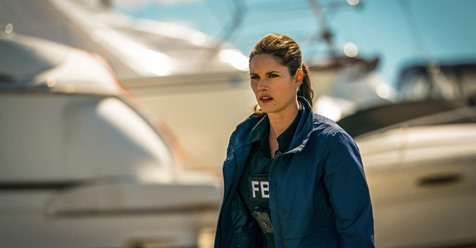 Tonight on CBS FBI premieres with an all-new Tuesday, May 14, 2019, season 1 episode 22, “Closure,” and we have your FBI recap below. On tonight’s FBI episode as per the CBS synopsis, “In the Season 1 finale, a woman with information about the death of Maggie’s husband is abducted, leading OA and the team to uncover a criminal operation larger than anyone imagined.

Also, Dana puts her career in jeopardy when she stands by and allows Maggie to work on this case that has such a personal connection to her.”

A man in a suit follows a woman on the morning city sidewalk. He grabs her from behind and puts her in the trunk of his car. Later, Maggie calls Angela from a diner. The NYPD answers. She has been kidnapped.

Maggie arrives on the scene. The officer tells her there was a witness and they have her cell phone. OA arrives. Maggie explains that she made a meeting with Angela at the diner after OA found a connection between her and Jason.

Dana calls Maggie into her office. They can work the case but if they discover solid evidence that this woman is connected to Jason, Maggie needs to step aside.

OA visits Angela’s apartment. Her roommate shares that Angela wasn’t into anything bad, she only worked too much. OA and Maggie visit her job. They are in shock. Her boss mentions she recently broke up with her boyfriend.

OA and Maggie find Angela’s car in a lot with noting visibly in it. Nearby, Maggie finds a heel and then a body. It’s Angela. They discover she was strangled.

The team meets to discuss the case. After, Kristen tells Jubal about finding texts between Maggie’s Jason and Angela. Jubal tells her not to feel guilty. Angela’s death is not on her.

Maggie and OA visit a garage where a car was stolen. The suspect broke in and took a Ford Fusion. He also shot the owner’s dog. After checking the dog’s nails for DNA, Kristen tells Jubal they have a match. The man in the suit. OA and Maggie head with back up to his home. The suspect runs for it. They chase him, engaging gunfire before he is accidentally struck by a truck in the street. He dies. OA questions Maggie’s ability for a clear shot minutes earlier. Was she afraid to kill him because then she wouldn’t find out about Jason?

After some digging, they find a video of Angela’s ex following her in the street. They also find a call between the hitman and the boyfriend.

OA and Maggie visit the ex who says he hasn’t seen her in 3 weeks. He sees the proposed and she freaked. She shared that she has been living another life and not one she is proud of. Back at the office, Kristen has discovered Angela’s connection to a Mexican drug cartel.

Jubal updates the team on the cartel leader. They also discover Angela’s boss Sophie went to the same college where the cartel leader went. The two are working together to launder money. Dana asks Maggie to step down when they discover Jason knew this as it was listed in his notes. Maggie is upset. Dana understands and lets her stay on the case.

OA and Maggie arrive at Sophie’s office. She is gone. The assistant shares that she ran off to the airport. Jubal and Dana call in to stop the plane. They get weird from the team that she hasn’t been seen at the airport. Kristen tracks Sophie’s car with GPS.

Change of plans, it looks like she is headed to the marina. She is going to take a boat. OA and Maggie catch up with her on the street. They follow her. She gets out at the boatyard and runs. Maggie follows with a body cam. She finally gets her and confronts her. She admits to killing Jason. She urges Maggie to shoot her, but Maggie doesn’t. She knocks her out and OA cuffs her.

Back at the office, Dana, Jubal, and the team applaud her and Jason for helping to take down the cartel leader. Dana gets emotional. Jubal notices. He asks her later about it. She tells her she put in her resignation. She let her feelings allow Maggie to make that arrest and so it is time for her to be done. Jubal is shocked but supportive.

OA and Maggie talk about getting a real dinner together.