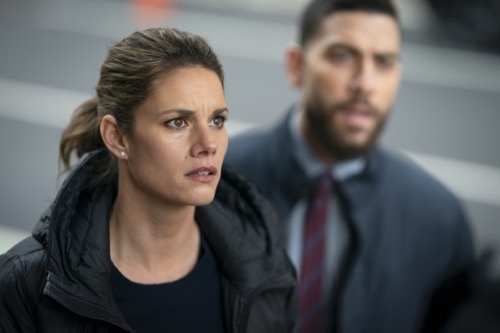 Tonight on CBS FBI premieres with an all-new Tuesday,  March 12, 2019, season 1 episode 16, “Invisible,” and we have your FBI recap below. On tonight’s FBI episode as per the CBS synopsis, “The daughter of a wealthy family is kidnapped in an attempt to gain notorious internet fame, and Maggie and OA discover the kidnapper’s plans go far beyond abduction in order to never be forgotten.”

The FBI was alerted when a young woman was abducted. The girl’s abduction was witnessed by an elderly woman that lives in the neighborhood, but because this woman likes to make frequent calls to dispatch it took the police almost an hour to show up and once they did they mishandled the case. The police waited four hours before calling the FBI and the special agents assigned to the case had lost credible time. Special Agents Maggie Bell and Omar Adom Zidan needed to trace Elizabeth Chase’s movements and they had to consider why she was taken. She came from a technically working rich family and she could have been taken for the ransom alone or the whole thing wasn’t about money. It could be about sexual sadism and the victim could be abducted by someone that had no reason to keep her alive.

Until the agents were either contacted or found the body, they had to work the case like any other. They went over the events of the night Elizabeth was taken. She had gone out to dinner with father Benjamin Chase who runs several online magazines and who was currently going through a nasty divorce with her mother Margaret Chase. Margaret was a socialite from old money and she had posted her daughter’s abduction online. She thought that she was just getting the word out there and all she did was highlight a potentially sensitive case. Margaret, of course, blamed her daughter’s abduction on her ex who she says has a lot of enemies and Benjamin did deny it when he spoke to the FBI.

Benjamin was in the business of sensationalizing people’s lives and naturally, he’s upset a lot of people. It was such a long list of enemies that he didn’t think the FBI could get through them all and so they were figuring out what to do when the ransom call came in. It was actually a text and it demanded a million dollars in cash that was supposed to be left in a trash can down in the subway. It seemed odd that someone so calm who managed to abduct Elizabeth so easily would then make a mistake by asking for a public drop-off, but Maggie and OA followed the lead and dropped off the money. The money was left in a trash can and it was picked up a homeless guy. The guy then left the train station and after waiting around for a while he started to hand out the money to other homeless people in the area.

The FBI quickly moved in and arrested their suspect, but he had nothing to do with the kidnapping. He had gotten paid to pick up the bag and he was supposed to hand it off to someone who never showed. Only the FBI used surveillance to find out who was this mysterious person that never showed and it turned out to be Benjamin’s assistant. The assistant said he hated Benjamin’s guts and that he wanted to make the man pay. So that’s when he piggy-backed off the abduction. The assistant didn’t take Elizabeth though he thought to use the situation by making that ransom demand just because he wanted to squeeze a million dollars out of his boss. And while the ransom situation drained their resources and had everyone looking in the wrong direction, the real culprit did go on to make a mistake.

The analyst found someone stole an inhaler from a pharmacy. It would make sense if that person was connected to Elizabeth because she had asthma and she had been forced to leave her inhaler behind when she was abducted, but if her abductor wanted to keep her alive then he would have to get his hands on an inhaler without a prescription and so the robbery at the pharmacy was the best lead. The FBI checked surveillance cameras in the area and they spotted a teenager running from the scene. He was later identified as Charlie Jacobs. He was a high schooler who did show up for school that day and so the agent tracks him down. They went in just wanting to ask him a few questions and unfortunately, he made a run for it.

Charlie went to the roof and before he jumped he said he “just wanted to be famous”. No one knew what he was talking about and so they dug into his personal life. They even traced the soil on his car and it came from an area upstate. The FBI patrolled the area and they found Elizabeth out in the woods. She had used a broken window to cut herself free from restraints and had tried to make a run for it. If the agents hadn’t found her in time then she could have died from exposure, but thankfully the worst was averted and Elizabeth was alert enough to answer questions. She said that two guys kidnapped her and that she had overheard them talking about killing a bunch of kids. She didn’t hear anything else because there had been a bag over her heard and all she pick out was muffles. And so all the FBI knew was that another teenager was on the brink of committing a massacre.

They tried to track down this teenager by pretending to be Charlie, but soon his death was announced on the news and that meant this other guy turned off his cell phone before they could pinpoint his exact location. The closest they got was a three-block ratio. No one stood out to the FBI and so they asked Elizabeth if she knew anyone from that area. She said that the guy she tutors lives there. His name was Sam and he tried asking her out except she was already in a relationship. Elizabeth was dating a basketball player and so she tried to turn down Sam nicely but he told her that she would be sorry and he said that soon he was going to be famous. Again, that word. Sam and Charlie both believed that to be famous that meant someone would never forget their name and with such unstable children – they were alluding to an attack.

The FBI combed through their text messages to figure out what happened. Sam was the more dominant one and he ordered Charlie to kidnap Elizabeth because Sam wanted to impress her by killing everyone at her boyfriend’s basketball game. The FBI later found Sam at the game and they tried to arrest him, but he didn’t want to come without a fight and so OA ambushed him. He got for his troubles and so it was lucky that it didn’t penetrate the bulletproof vest. OA still ended up bruise and it was worth it because they captured Sam alive. And Sam’s father actually thanked OA for not harming his son.

But Kristen who was a great analyst thought maybe it was time for her to go out into the field and so she had her application approved by the big boss.