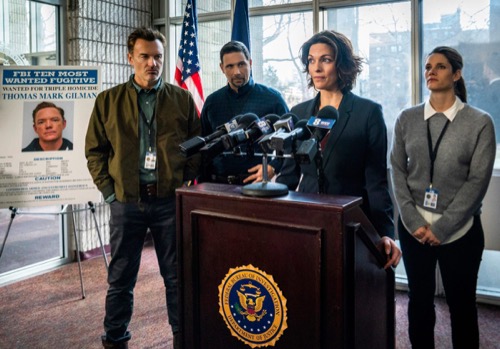 Tonight on CBS FBI premieres with an all-new Tuesday, April 2, 2019, season 1 episode 18, “Most Wanted,” and we have your FBI recap below. On tonight’s FBI episode as per the CBS synopsis, “Maggie and Dana struggle to find justice for victims murdered by a serial killer who left a ghoulish mark on all of his victims, while the mayor limits the investigation in order to prevent economical loss.”

We see Thomas Gilman and his wife, Connie, having dinner with their children. Once the children leave the table the Connie tells her Tom, that she knows where he got the infection and she has packed his bags. He says he saw her text her sister, she says she is going to get the children. She runs into the children’s rooms and sees the children dead, Tom goes to choke his Connie and pulls out a knife that already has blood on it.

The next day, the family is outside the house and surprised that Tom and the family are not ready for service, the man goes inside to check and see if they perhaps slept in. As the man approaches the house, it blows up.

Police and fire crew are on the scene, Tom is a deportation officer for the ice office in Port Chester, they suspect he was the target. Connie’s car is gone, Tom took the car and left, they determine that he has a fourteen hour lead on them.

All the victims had their throats cut, Connie got a bonus bullet in the head. At the station, Mosier is putting Tom on the Most Wanted list.

At a press conference, Assistant Special Agent in Charge, Isobel Castille announces that Thomas Gillman is been put on the Ten Most Wanted list.

Lacroix is on the scene and he is taking over, Bell is not happy about it. He tells Anna to get on all of Tom’s co-workers. Crosby shows up, Lacroix tells him next time a fugitive shows up don’t throw a refrigerator down the staircase. Lacroix tells the team that their job is to bring Gillman to justice.

Connie’s sister is at the station, tells Lacroix that Connie wanted a divorce, she told her sister that she didn’t deserve how Tom treated her. She says Tom was always off on his own, talking to his dogs, really didn’t have friends and barely talked to his kids.

Apparently, Tom was having an affair with a woman at a massage parlor. His friend tells Lacroix that Tom was a hunter, he shows him a photo and there is a marker on a tree. By that marker, they are able to find his location, but he is gone and his dog is starving, he has chewed on his leash. He left his rifle, Lacroix thinks he is long gone and found another mode of transportation.

Tom buys a car off a man and when the man wants to take the license plate off to turn into the DMV, Tom stabs him in the eye with a screwdriver.

Barnes and Lacroix are interviewing Tom’s girlfriend, they ask what he was like. She says he was shy the first time, not the second time. Then he came back every week but said he never came back. Lacroix tells the woman that Gillman was taking an antibiotic for STDs.

The team is on the scene of the man with the screwdriver in his eye, they are getting closer to Gillman and they think he is getting ready to cross into Canada. Lacroix thinks they should check out local massage parlors, if Gillman created a bad habit, he will have a hard time abstaining.

Lacroix and Barnes arrive at a massage parlor and find a girl in a room full of blood, Gillman is gone.

Lacroix wants full access to the Ice database, to try and find a clue to why Gillman is hanging out in Buffalo.

In the database, they find that Tom was searching the database for Mr. Venuti; the team visit him and ask why Tom would have him on his radar. Lacroix shows Venuti a photo of Tom’s dead wife and children, the man looks scared.

The team goes back to see Venutti and tell him that they know Tom is his brother, Venutti breaks down. He says that he has had no contact with Tom up until two days ago. He asked about their mother, he said she is dead and buried in an unmarked graveyard.

Tom goes to the graveyard, it is snow covered. He grabs a pickax from a worker and starts to dig into the ground, then shouts at his father’s grave and hits it with the pick ax The worker tries to calm him down and Tom kills him with the pickax.

Tom has been turning his phone on and off so it can’t be tracked. Tom’s phone is on, Lacroix has him call his brother and he gives him an address but shouts that it is a trap. Lacroix grabs the phone and Venutti says that Tom took the beatings for him, he owes him. The team lure Tom with a tape of his mother saying she is sorry, he thinks it is really his mother.

Agent Bell is there, Lacroix promised that she could be there when they captured Tom.

They arrive at their parent’s house, Venutti is there with Tom and he is still trying to protect his brother even though Tom has a gun to his head. Lacroix tries to talk Tom out of shooting his brother, bullets go flying and Bell tosses a shotgun to Lacroix who shoots Tom’s arm off at the elbow.