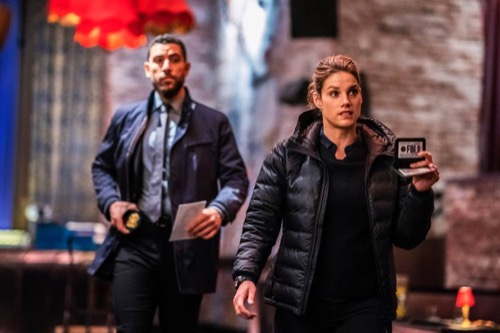 Tonight on CBS FBI premieres with an all-new Tuesday,  January 15, 2019, season 1 episode 11 Winter Premiere called, “Identity Crisis,” and we have your FBI recap below. On tonight’s FBI episode as per the CBS synopsis, “A judge and her daughter are murdered after she sentenced a man to life in prison, and Maggie and OA search for the killer behind the possible retaliation. Dana has a vested interest in this case as she has a history with the victim.”

A Federal judge named Leslie leaves the courthouse as she talks to her daughter. They discuss how she just sentenced a gang member to years in prison. They walk a side street. Shots ring out. Both of the ladies are hit. Maggie and OA arrive at the scene. There aren’t any witnesses.

Dana visits the victims’ husband Mike with OA and Maggie. Dana knows him and is a friend of the family. She offers him around the clock protection. They talk about his daughter leaving Goldman Sachs and how his wife was recently threatened in the courtroom.

Maggie and OA get to work trying to figure out what the judge was doing prior to being gunned down. The day before the judge was driven to a club around noon. They head there but fail to get the owners to cooperate. On there way out a woman spills a drink on OA and gets angry. They cuff her and bring her in. After getting in the car Maggie uncuffs her with a smile. They went to Quantico together. She is undercover. They talk. The men at the club are involved in the cartel and washing money.

Back at the office, Kristen can’t seem to find a connection between the men and the judge. Meanwhile, one of the investigators found cryptic messages on the daughter’s phone. They also get word that DNA found on the daughter’s body is that of one of the men from the club. They bring him in. He admits he had sex with her the night before but didn’t know who she was in the picture they showed him because he didn’t have his glasses on. They are forced to let him go.

Video footage from the club steers them in another direction. They talk to the doorman who says he saw a girl running from the club with a ripped shirt. She was crying. It was the daughter. Maybe the sex wasn’t consensual? Dana tells them to get in touch with the undercover Gina and have her help with the drug angle. After they arrest one of the club owners they can use him as leverage in the judge’s death.

Gina heads to the club that night with a friend. She drives her bosses around. They have some errands and then they plan on having fun. OA and Maggie follow. Just when they make a stop and OA and Maggie hide on the other side of the road, Gina tells them she thinks she saw the cops. They leave. Maggie and OA don’t understand why she blew the deal for them.

The next day, OA and Maggie talk to Gina who tells them the deal wasn’t going down because one of the men she something so she had them all leave. OA isn’t really buying it. Gina tells him she is supposed to work this case undercover until she found the connection to the cartel. She knows all about these guys and she knows the right strategy.

Jubal goes in undercover to make a buy with Gina as his connection. After he shows them some ID, they ask him to take a polygraph. He does and passes. They tell him they will be in touch. Jail leaves. OA and Maggie meet with Gina. She refers to the men by their first names. It strikes a chord with OA. Maggie starts to worry and goes to talk to her supervisor. He is mad they are questioning her. She is one of the best. Maggie reports back to the others. Kristen sees it differently after finding footage of Gina getting close and hugging one of the men.

OA and Maggie meet with Gina again. Maggie wants to talk to her alone. OA thinks it is a bad idea but he lets her. Gina says she just went with a moment they had so she could protect herself. She pleads with Maggie to let it go. If she gets pulled now, she will lose her reputation as a good agent. Maggie lets it go and tells OA she thinks Gina is fine. OA tells her he will follow her lead but if there is another hiccup things have to change.

Later, OA and Maggie wait on a stakeout. He tells her how he got too close to a criminal. Maggie can see how things can get complicated. She checks her phone. Gina lied. She isn’t on her way. She is on her way to NJ. They radio to Jubal that the deal is off. Gina is on the run. They head out to find them and follow. They find them a short time later. They surround the car. They get Gina out. No-one else is with her. She breaks down that one of the men she has become close to is a good person. He understands her like no-one else. Maggie tries to talk some sense into her. Gina finally tells her the men are headed to Mexico. They get them later in the woods.

Maggie checks in with Dana who tells her how they discovered one of the drug dealers had a relationship with the judge’s daughter. She died protecting her daughter. She also finds out that Gina is in trouble. The US Attorney is filing charges against her.

Maggie pays Gina a visit to custody and tells her she did everything she could to help her.

OA offers Maggie an ear if she wants to talk.