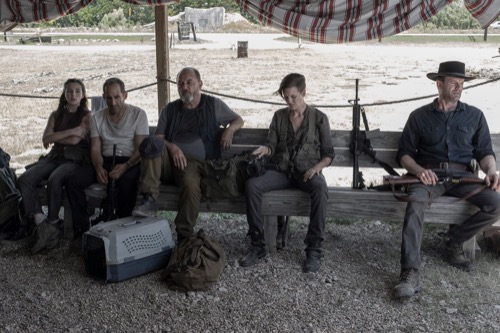 On AMC tonight Fear The Walking Dead (FTWD) airs with an all-new Sunday, September 29, 2019, episode and we have your Fear The Walking Dead Recap below! On tonight’s FTWD season 5 episode 16 finale called, “End of the Line,” as per the AMC synopsis, “Facing an unknown future, Morgan leads the group on a mission. Meanwhile, Al puts the pieces together. John and June make a promise.”

Can you believe FTWD Season 5 finale is already here? Don’t forget to bookmark this spot and come back later for our Fear The Walking Dead recap between 9 PM – 10 PM ET.  While you wait for the recap, don’t forget to check out all our FWTD news, spoilers & more, right here!

When we ended off last time, Morgan radioed Virginia and told her they needed her help. We see Dwight, he is running and then he hears someone on the radio and thinks it is his wife, when he realizes that it is not, he throws away the walkie talkie. He hears some horses coming and at first hides behind a swat truck, then he notices that nobody is on them.

Back at Humbug’s Gulch, Victoria tells Morgan that she is happy that he called her. She reminds him that she told him the future was not over that bridge. Morgan tells her where they are and she says that she tried to help them and this is what they turned into. Morgan tells her that they need help to clear the place, Virginia says no, there is no place for them there, they have to go with her. Morgan asks her to promise not to split them up, she says that she cannot do that. She has over 800 people and she makes the decisions, so should she come and get them, or not. Morgan says yes. Virginia says she will be there by the end of the day and at least they will be alive.

Morgan turns around to his group and he says she is sorry, it’s sad, they look so defeated. June tells Morgan that he did everything he could, he says so, did she. Morgan and Grace are talking, she tells him that she has only until Virginia gets there; she only cares about the future. Morgan vows he won’t let anything happen to her, she says he may not have any choice.

Al is watching a video. John walks up to June and she tells him that she doesn’t want to go back to the person she was before she met him. He reminds her that they have something to fight for. All of a sudden, Dwight arrives with about a dozen horses and he tells them that if there are horses, that means that there is water nearby. They can make it work, they don’t need her.

Alicia asks Strand for a weapon, she says that she can do it, she is not afraid anymore. Morgan asks her what she is doing, she says she can clear this place. Dwight tells them they have to fight, he is who is because of them. Daniel is in agreement, they need to clear this place and they have to take care of Virginia. Morgan smiles, then he tells Alicia to get everyone as far away as they can. Morgan, John and some of the others are on horseback and they are leading the walkers to Virginia.

The town is empty of walkers, Alicia and Al look around. Alicia really thinks they can rebuild and make this place their home.

Grace is on horseback with Morgan, she is having a hard time; he asks her if she is going to be ok. John tells June that when they get back he is going to make an honest woman out of her.

Daniel and Strand leave the pack to keep watch. June thanks Dwight for everything that he has done for them, he could have gone to Virginia and maybe find Sheri for him. Dwight tells her he would rather be with them than have Virginia over his head when he does find Sheri.

Al tells the group that stayed behind that the horses came from Virginia, she shows her hand and there are a handful of keys.

Daniel is alone with Strand and he tells him that he knows he wants to give up and go with Virginia. Strand says that he just doesn’t want to give up all their options, maybe it isn’t that bad.

Daniel and Strand see a bunch of trucks coming, Virginia is on her way. Virginia gets out of her truck, Daniel looks on and sees Luciana. Daniel tells them to turn around the heard, they have no choice. Strand leaves Daniel and tells him that she is going to take care of this, head back to the Gulch with everyone. Dwight is having a hard time, he jumps off his horse and the walkers take it. Dwight is trying his best to make it out of there, but if someone doesn’t come soon, he is going to be taken. All of a sudden everyone else is coming for Dwight, he stands there waiting as there is a river and he might have to jump in it to save himself. Dwight tells them all to go, he can save himself. Morgan jumps off the horse and leaves Grace, he goes on foot to save Dwight. Morgan catches up to Dwight and he tells him that he is not leaving him behind. John is there, he shoots a few. Dwight has hurt his leg. John goes into the river and tells everyone to follow him, he leads the walkers into the river to drown.

Everyone is back at the Gulch, Al tells them that everyone died there because they tried to fight back, some of her people died there too, that is where the horses came from. Morgan says that Virginia has them vastly outnumbered. Morgan tells that they have to live life the way they want to until Virginia takes them. John and June are getting married, Dwight gives them he and his wife’s wedding rings. The rabbi officiates over the wedding, Dwight’s ring doesn’t fit John, so Charlie gives June her shoelace and she ties it around John’s neck. It’s done, the two are married.

Daniel and Grace sing, Charlie is playing the banjo, Al is videotaping everything. Right now, they are living life on their own terms. But not for long, Virginia and her crew are arriving. Virginia is in a tanker, she says Strand told her about the little stunt they were trying to pull. Morgan tells her that if they go with her, it’s all of them or none of them. He tells her she won, and she should let them win too, they are priceless to her because they are alive. And, the only way for this to work is if they don’t lose a single one of them. Otherwise, they both lose. Virginia says fine, she guesses it is not worth wasting a couple of bullets over. Morgan goes to turn around to get everyone and Virginia has this evil look on her face, you just know that she is lying.

All the kids climb into the first truck, Luciana tells them it is going to be ok. More and more pile into the trucks, it is nighttime, the rest are loading in and Virginia tells Al that she better tell her about that helicopter. Alicia doesn’t feel good about this, Strand tells her they can do more damage on the inside. Charlie runs to Daniel, he tells her that he will find a way to find her. Daniel see his cat and he tells a guy he travels with the cat, the man says not anymore.

A few men take John away and it’s not in an easy fashion, very forcibly. Obviously, Virginia’s people are not going to be nice about this. June gets in another vehicle. Grace and Morgan talk, he tells her that on the carousel he felt something with her, he is not sure what it was, but he felt it. Virginia introduces Grace to a doctor, as she is walking away she tells him that she felt it too.

Morgan is the last one there with Virginia, he looks on at all the cars going. Virginia asks him if he is ready. She tells him that he stays there, she has to protect the future, she can’t repeat the past. She takes out of a gun to shoot him and he is fast on his feet and knocks the gun out of her hand with his stick. He is shot, he tries to reach his stick and can’t. Virginia is on her feet, she has the gun and Morgan is trying to crawl away from her. Virginia aims her gun, Morgan looks up at her , she says she resents his face so much. She goes to shoot him, and the gun doesn’t work.

Virginia gets a call, Grace is not sick, she is pregnant. Morgan tells her that she was wrong, they did have a future. Virginia tells him that she hopes he dies, she takes her hat and she leaves. Meanwhile, walkers are on their way towards Morgan, he crawls into the church and starts to pray. He has the walkie talkie with him and he says it was about the future, they made a hard call, for her, for all of them, so Grace, if you are listening, just live. Walkers descend on Morgan.