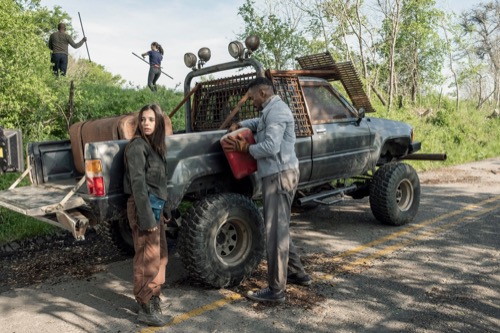 On AMC tonight Fear The Walking Dead (FTWD) airs with an all-new Sunday, August 11, 2019, episode and we have your Fear The Walking Dead Recap below! On tonight’s FTWD season 5 episode 9 called, “Channel 4,” as per the AMC synopsis, “The group, traveling in a convoy, doubles-down on their mission to help survivors.

In an effort to encourage more survivors to reach out, Al, Luciana, and Charlie document Morgan and the gang on a dangerous mission to help a reclusive survivor.”

Tonight’s episode of FWTD opens with us seeing one of Al’s videos; Morgan says that somebody helped him and this is what this is all about, Alicia says she did cleanup – killing them is what she was good at, Daniel says it was the place where he was going to spend the rest of his days with that cat – this is better, Victor says the universe is testing them, there is power in being a survivor, John says that money doesn’t mean anything now – those people could have done something in the world, June says if they could make the way they are spread – that would be better., many others also make comments about their journey on the plane and back.

Al talks about her journey, she is not used to being on that side of the camera. Morgan and John prepare more boxes to go out and help people. Sarah and Daniel are the ones who fill the trucks with gas, and when Logan tried to steal their gas, they left him and it felt good.

Dwight is helping out and he is happy that he is now on the right side. Daniel wants to give him a haircut, but Dwight won’t have it.

They have made a camp of sorts, June and Grace are in charge of the caravan, they try to keep everyone comfortable. Walkers come into the area, June takes care of them; she says they will find a place called home, they will just keep looking. Al asks her when is the wedding, she says they are not in a hurry, John says she has his promise and his heart, that is enough for now.

Morgan says that he feels good about how far they have come and what they are doing.

John, Morgan, Luciana, and Al arrive at the house, a woman named Tess is inside and she can’t get out because there are land mines everywhere. Morgan asks Tess where her husband is, she says he is gone to the drugstore to get asthma drugs for her son. Morgan says that they will send people to look for him, but she should come out. She sees the camera and asks why they are recording, Morgan says they want to show people what they are doing.

Tess says she can’t leave, she hasn’t left since everything went bad – they have supplies. Morgan says that he understands, it took him a long time to leave the place he was at.

June is at a drug store and going through the items, she can’t find an inhaler.

Alicia hasn’t killed any walkers since the plane, she didn’t want to go back there.

Morgan and Al try to get around to the walkers at Tess’s house, but they break down a fence and fall on a land mine.

A walker comes at Alicia in the woods, it is Tess’s husband, he has a backpack with an inhaler inside. Morgan takes a chance and runs towards the house, Al shouts at him not to move his left foot, there is a mine. Victor, Alicia, and June arrive at Tess’s house, she says she has the inhaler. Morgan asks Tess to come outside, she wants to wait for her husband Ben. Morgan says he is not coming back, they found him, he had the medicine her son needs. Al helps Morgan deactivate the land mine, she tells him that she is 50/50 sure on what she is telling him.

Morgan says he had something planned for the evening, he is still doing it. Tess interrupts and says she can help, she comes out of the house she has seen Ben do it many times. Morgan tells everyone to back up, he does what Tess and Al tell him to do, Morgan backs away, he is fine. Tess hadn’t stepped out of the house in two years, but she did to help Morgan. Once Morgan gets with the others, the land mine goes off. Tess and her son come out of the house, Morgan approaches them and gives the boy his puffer.

Tess and her son do leave the house and join the group, she is happy to be out and with them. Everyone is having dinner when Sarah and others arrive. Everyone enjoys a meal, they are talking and smiling.

We go back to al videotaping Morgan, he tells her that he has never said goodbye to his family even though they have been gone a long time, he just doesn’t know-how. John says he needs to make this world a little bit like it used to be. June says she wants to find everyone a home. Victor says to make the most of his second chance. Daniel says that knowing each day that he has done well. Alicia asks Al what she needs help with, she says making sure these interviews are just not on tape. The tape was made to encourage others to also help someone out there.

We see a guy, he just watched the tape – he finds gas, fills his tank in his motorcycle and is about to leave when two cars drive up. Logan is there with his people, he throws boots at him and says that it what happens when you walk 200 miles. They take his backpack and his gas. Logan tells his people to make sure he can’t follow him, they shoot up his motorcycle. Logan throws the guy a walkie talkie and tells him to call the people on the tape, and when they pick him up, tell them they are making enemies out there.