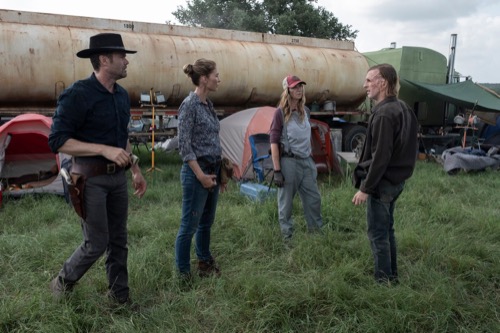 On AMC tonight Fear The Walking Dead (FTWD) airs with an all-new Sunday, September 1, 2019, episode and we have your Fear The Walking Dead Recap below! On tonight’s FTWD season 5 episode 12 called, “Ner Tamid,” as per the AMC synopsis, “In search of a permanent home for the convoy, Charlie is drawn to a synagogue where she encounters a Rabbi surviving on his own. Elsewhere, Sarah and Dwight face unexpected foes.”

Rabbi Jacob Kessner is in temple B’nai Israel all by himself when he hears a thump at the door. He is the process of performing a Jewish ritual, and stops to put on his jacket, open the door and kill the walker that was banging on the door. He proceeds to look outside to make sure there are no other walkers and notices the gate is open, he locks it. When he turns around, he notices two walkers trying to get into a car, he kills one and other lands on top of him. All of a sudden, the car door opens, knocking the walker off him and giving him a chance to shoot it. Inside the car, Charlie is there. They introduce themselves.

The convoy stops to make camp, Sarah tells June that they are locked up good. John tells June that she should relax, she says this is not the place – they need to keep moving. Dwayne walks up and announces that he did a head count and someone is missing.

The next day, Charlie wakes up to find the rabbi outside killing walkers. She tells him that she was looking for something and she got separated from her group. She asks him if he thinks God led her here.

They both head into the temple, he is still following his Jewish traditions and she asks him why. He says that they are more important than ever. The battery is running out inside the temple, it is the last one, Charlie says that she can help. Charlie radios, June answers and says she is sorry. Charlie says it is not her fault, she ran away, she can’t keep living the way they have. Charlie says that she may have found their new home, she tells them to come to her, and bring car batteries. The rabbi tells Charlie to go inside and make herself at home, he can keep them safe. He walks around the grounds to look for where the walkers are coming from.

June and John arrive in the Temple with the batteries; they tell the rabbi that they are 36 now in their convoy. June wants to leave, but Charlie says she promised that they would stay and help fix his fence. Outside, June tells Charlie that she knows she wants to find a place to settle down, but this is not it. June tells her it is not safe and they need to get back to the convoy.

Dwayne and Sarah share a beer and keep a lookout around the convoy. All of a sudden, Dawyne sees Logan’s guys, they found them.

Charlie is alone with the rabbi and she tells him that she wants to live there, he says it is not a good idea. June and John walk up and say that they need to leave. Charlie wants to stay, she doesn’t want to leave the rabbi alone. Sarah radios June, tells her that Logan’s people have found them.

All of a sudden, the fence breaks and walkers are coming towards the temple. Rabbi opens the door and sees them all, then closes the door and tells June, John and Charlie that they are after him, they are his parishioners. They head to the roof, there is a ladder and John manages to position it so they can escape and get back in the truck. June follows him, they take the ladder and cross from vehicle to vehicle until they can get back in the truck. Charlie and the rabbi look on. John and June are close, but then they drop the ladder.

Charlie wants to pick them off one at a time, the rabbi says he can’t use bullets on them. June and John say that if they keep shooting they will draw more. Charlie doesn’t want to leave. Rabbi tries to deter her from staying and says that he no longer believes in God. Charlie tells the rabbi that they can fix this, she asks him if he has something that makes a lot of noise.

Charlie opens the door to the temple and the rabbi is blowing a shofars (an ancient musical horn). All the walks go inside the temple, June and John barricade the doors. The rabbi says he is sorry to Charlie that it didn’t end up being a place that she could call home.

Sarah is driving the tanker with Dwayne when they run out of gas. Beside them is Logan’s men. Sarah says if they go down, they are going down with the ship. Logan’s men leave when they see the Swat vehicle coming at them.

John, June, Charlie and the rabbi are safe away from the temple; and with the convoy. Dwayne is a little worried that Logan’s people turned away, he doesn’t think they do anything without a reason.

Logan is in a vehicle with Doris, they arrive at the quarry and he tells her they have arrived at the promised land.