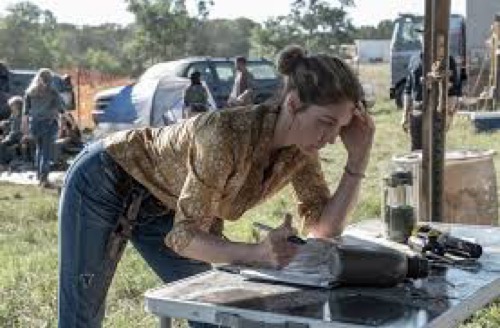 On AMC tonight Fear The Walking Dead (FTWD) airs with an all-new Sunday, September 22, 2019, episode and we have your Fear The Walking Dead Recap below! On tonight’s FTWD season 5 episode 15 called, “Channel 5,” as per the AMC synopsis, “When Virginia makes a statement, Al responds in kind. Facing dire circumstances, June leads the search for a new place to call home, and with Grace’s condition worsening, Morgan makes a tough call.”

Virginia and her people are riding down the road on horseback. We then see a video, Tom is talking about when things went bad, then a woman, and a few men; all saying they were looking for help and they found Virginia. Then Virginia is on the video saying it’s about getting from today to tomorrow. She says they have been traveling all around and every story is the same, settlement after settlement; places filled with good people, they just need help and good ideas. She tells people to tune into channel 5, each of them is the key to the future. The more they help each other, the sooner they will get better. Al turns off the video, Morgan is there and Tom, she says its not the truth. Al is so angry, she takes the TV and tosses it to the ground smashing it.

We then see a video with Morgan, Alicia, Tom, June, Charlie and Al saying they don’t need to lie, make fake documentaries like Virginia, they have a tanker of gas and they are going to find their home.

Grace is alive, Morgan fixes her arm that has an IV in it. She was dehydrated, trouble keeping food down; June doesn’t know what she has. Morgan feels guilty for Grace being ill, he feels like he should have been there for her.

Tom is now shown on the video and he says Virginia, she makes you afraid to trust people and there he is, he guesses he is lucky. All of a sudden he sees Janice and runs to her; they found his sister. Tom goes on to say that everybody is useful here. Alicia is still painting trees, she says art makes sense to her. Daniel is on the road, June radios him to find out how the school is looking, he says it is burned down. June is hoping she is right about where they are going.

Grace is trying to show Charlie how to play the guitar, Daniel is there. Grace just wants to be around long enough to see them find their home.

Everyone is around the fireplace talking about how much gas they have and where they are heading when there is a breach, a walker comes into camp. Dwight goes over and kills is but notices that he has on a Sheriff’s badge. John goes over and looks at the badge it reads Humbug’s, Sheriff Sheley. John says he has been there and these places were designed to live the way they did before, no gasoline, no electricity and there is plenty of room for them all with a fishing hole nearby. June says it feels like the right place.

Grace is worse, Charlie calls for June. She is severely dehydrated, her heart is racing; they need to get moving. Morgan and John to try and find supplies to help Grace. Morgan is frustrated and Morgan tries to keep his spirits up when Al finds something just as she is attacked by a walker. Alicia saves her and they get the supplies and go. John goes to see June and tells her that when they reach the Gulch, he wants to marry her, no more waiting.

Grace is somewhat better, Morgan is happy. Everyone is happy that they got Grace what she needed, even if they had to detour to get it.

They have encountered a problem, a bridge is out and they don’t have enough gas to take another route. All of a sudden they have company, it’s Virginia and she says it looks like they could use a hand. Morgan asks her how she knew they were, she says that they have been keeping an eye on them. She tells them that if they didn’t reroute for a sick person, they wouldn’t be in this predicament now. Strand asks Virginia right out, what does taking her help mean. Tom says like she tried to kill him, she says she did it because he became a liability, and she is not going to apologize for it.

Virginia tells Dwight that she checked up on his wife as she said, she found an Engineer that broke bread with her a few months back and she was really worried about him. Mogan tells Virginia that they want to do things differently than her. Virginia gets her people to shoot their machine guns in the air to attract walkers and then she heads in her jeep and leaves. Morgan shouts at everyone to cross the bridge. Walkers are coming from everywhere, Morgan and Al are fending them off as everyone tries to cross the bridge. Strand gets in on trying to kill them, but there are so many. The bridge is giving in, a horde of walkers falls through. Tom is left behind and he doesn’t make it.

Grace is upset, she feels like Tom died because of the detour.

Everyone is upset and Morgan reminds them that Tom wanted to finish this and that is what they should do. They are on foot for the last part of their journey to the Gulch. John asks the Rabbi if he does weddings, he smiles and says that he would like to try it. John tells Morgan that he will needs a best man if he knows anybody. Daniel tells Morgan that they all don’t know how long they have in this world and if there are things to say, then they should say them. They arrive at Humbug’s Gulch, everyone looks hopeful. Janice says she wants Virginia to see this and to see why she lost.

Morgan tells Grace that she is happy she is there to see this. All of a sudden, everyone looks on, there are thousands and thousands of walkers ahead of them. Alicia tells them not to give up. Strand says there is one thing they can do, suggesting Virginia. Dwight won’t have it, he says he will walk further. June says that she is sorry. Al says if they are going to do this, then they should do it. Morgan says to Janice, that he really is sorry. Morgan calls Virginia and tells her that if she is listening, they need her help.