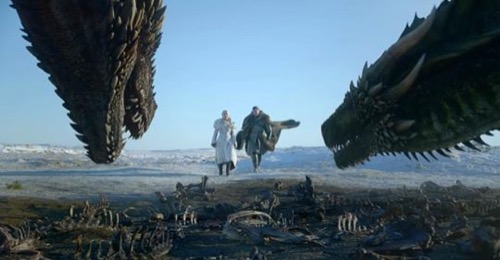 Tonight on HBO, Game of Thrones is back with an all-new Sunday, April 14, season 8 episode 1 premiere and we’ve got your Game of Thrones recap down below! On this evening’s season 8 premiere as per the HBO synopsis, “The Great War has come, the Wall has fallen and the Night King’s army of the dead marches towards Westeros. The end is here, but who will take the Iron Throne?”

Daenerys and Jon arrive in Winterfell, lead by hundreds of soldiers. Arya watches Jon pass from the sidelines as all of Winterfell watch. Daenerys’ dragons fly overhead, screeching. The northerners watch scared while Arya smiles. Sansa watches from up above.

Jon hugs Sansa and Bran hello. Daenerys thanks Sansa for the invite who tells her Winterfell is her’s now. Bran breaks the small talk to tell Daenerys they don’t have time. The Knight King has her dragon and the wall is down.

Winterfell and the surrounding lords and ladies meet. Tyrion announces that the Lannister army is on the way after Sansa tells her lords and ladies to get their armies ready. Sansa doesn’t know how they will manage to feed them all.

Tyrion stops by to talk to Sansa. He apologizes for the last time they saw one another at Joffrey’s wedding. They speak about Cersei and how Tyrion thinks she now wants to survive.

Jon and Arya finally meet again out in the woods. They hug. He notices she still has her sword. He shows her his sword. They talk about Sansa and her dislike of Daenerys. Arya mentions that Sansa is just trying to defend their family. Jon points out that he is family.

Cersei is brought the news that the dead has broken through the wall. She is happy. Meanwhile, Euron still has Yara tied up on his ship. He heads to see Cersei who finishes telling Strickland he is always welcome here after he tells her it would be an honor to fight on her behalf. Strickland leaves. Euron wants to talk to Cersei about their relationship. Cersei tells him after the war. Seconds later she allows him into her chambers.

Bronn is with several ladies when he is called upon by Cersei. She wants him to kill her treasonous brothers for traveling north.

Euron gets dressed while Cersei drinks. He wants to know how he compares to her late husband. She humors him but does like that he is arrogant. He tells her he is going to put a prince in her belly after she tells him she wants to be alone now.

Theon rescues Yara from the ship. The two plan to fight to their death.

Daenerys and Jon walk in the yard talking. She knows Sansa doesn’t like her. Jon tells her that Sansa doesn’t know her yet. Daenerys is told by her men what her dragons have eaten. She is worried, it is not nearly enough. She heads to see them. Jon goes with her. She tells him to ride one while she rides the other. He panics but does it, yelping along the way. They make a stop and talk. They kiss. The dragons give Jon the eye.

Arya comes face to face with The Hound. He’ll never forget that she left him for dead. He calls her a cold bitch but that is why she is still alive. Arya asks Gendry to make her a sword of Valerian steel.

Sansa and Jon talk about Daenerys. He tells her that Daenerys

Daenerys and Jorah meet with Samwell. She is pleased to meet the man who saved Jorah. She must reward him. He tells her he needs a pardon. Daenerys reveals that she knew of his father and brother who both refused to bend the knee. It becomes evident to Samwell she had them killed. He starts to cry and she excuses him.

Samwell runs into Bran who tells him he needs to tell Jon about Daenerys. Samwell tracks him down. They hug and he reveals Daenerys had his father and brother killed. He tells Jon the truth, that he is the real king of the Iron Thrones. He speechless until he declares that his father was the most honorable man he knew. He wouldn’t lie. Samwell tells him he did so to protect him.

Tormund and the guys run into their own thinking the dead are around the corner. Some of the men show Tormund a message left by the Knight King. He has killed the Ember boy, hanging him dead on the wall as a message.

Jamie arrives at Winterfell and sees Bran from a distance. They exchange stares.