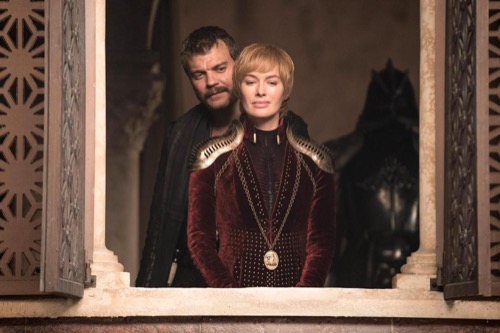 Tonight on HBO, Game of Thrones is back with an all-new Sunday, May 5, season 8 episode 4 premiere and we’ve got your Game of Thrones recap down below! On this evening’s episode as per the HBO synopsis, “The depiction of two powerful families – kings and queens, knights and renegades, liars and honest men – playing a deadly game for control of the Seven Kingdoms of Westeros, and to sit atop the Iron Throne.”

Daenerys cries as she kisses Jorah who lay dead on the ground following the battle. Sansa cries over Theon as Jon and the others look over the dead. Jon speaks to them all about keeping the dead and their memory alive. Arya, Daenerys, Jon, Samwell and more set fire to the remains of those they cared for. Flames and smoke engulf the outside of the castle as they all watch.

Later, everyone joins in the hall to eat. Gendry looks for Arya. Daenerys sees him walking by and asks him about his father. He was a murderer. Gendry didn’t know him. She appoints him the Lord of Storm’s End. They all cheer. Meanwhile, Brienne and Jamie drink while Davos and Tyrion talk about the Red Woman. Tormund gets them all going with a toast. They drink and laugh. Daenerys praised Arya for saving Winterfell.

As the celebration continues, Daenerys takes in Tormund’s comments about how Jon is strong, clever and gutsy. She sees Tyrion laughing with Jamie across the room. She gets up and leaves.

Tyrion, Jamie, Brienne, and the others play a drinking game. Tyrion calls out Brienne for being a virgin. She doesn’t disagree and gets up and leaves. Jamie follows. Upset, Tormund quickly gets over it when a young woman shows him some interest.

Gendry finds Arya. He confesses that he loves her and wants her to be his lady, the Lady of Storm’s End. She cannot, that is not who she is.

Jamie lets himself into Brienne’s room. She asks her about why she didn’t drink. Avoiding the question, they talk about Tormund. Jamie is jealous. He tells her its hot, talking his shirt off. He attempts to take her shirt off. She is reluctant and then takes it off herself.

Daenerys finds Jon. She loves him. They kiss. He is confused. She wants him to keep his secret so they can be together. He cannot. He has told Sansa and Arya. But she will always be his queen.

The next day, Daenerys and the others meet to discuss how they will take out Cersei. Sansa suggests they let all of the soldiers rest before the next battle but Daenerys disagrees. Jon takes Daenerys’ side, pledging to obey her, angering Sansa. After the meeting, Arya wants a word with Jon. All three of them meet with Bran by the tree. They don’t trust the queen. He tells he has to share something, asking Bran to do it.

Jamie and Tyrion talk about Brienne. Tyrion teases him. Bron shows up out of nowhere. He tells them Cersei hired him but for High Garden, he’ll let them live. They sit and come to an agreement.

Clegane and Arya bump into one another on horseback. He refers to her as a hero. She doesn’t like that word. They each share that they plan to leave.

Tyrion meets Sansa on a rooftop. They talk about Daenerys. Tyrion believes she will change the world. Sansa doesn’t see it. She also doesn’t want Jon going to the Capitol. The Stark men do badly there. He isn’t a Stark, Tyrion tells her. Her face drops. He senses something.

Jon says goodbye for now to Tormund, his wolf and Samwell and his wife who share they are expecting.

On the water, Tyrion shares with Varys the news of Jon. They have trouble now especially with Sansa’s dislike of Daenerys and Jon’s unwillingness to rule. Meanwhile, Daenerys is in the air with her dragons above the sea when one of them is shot down by Eon with arrows. He then strikes the boats. Tyrion jumps ship.

On land, men come out of the water. Greyworm looks for Missandei. He screams for her. Meanwhile, Cersei is getting a report from Eon while Missandei stands cuffed and crying.

Tyrion and Varys beg Daenerys not to attack the capitol. She is too angry. They killed her baby and now she has Missandei.

Alone, Tyrion and Varys talk about who should really take the throne. Tyrion believes in Daenerys and he Jon. Tyrion mentions a marriage between the two could serve all people. Varys thinks Daenerys is too strong-willed and would bend Jon. Varys may have to do what he thinks is right. Tyrion asks him not to. Varys shares that they each have a choice to make.

Back at Winterfell, Jamie gets the word about Cersei, Eon and the dragon from Sansa and Brienne.   Later that night he gets ready to leave. Brienne tries to stop him. He isn’t like his sister. He admits all of the horrible things he gets done before riding off.

Outside the gates, Tyrion, Daenerys, and their men face off. Tyrion and Qyburn meet to talk halfway. Each queen wants the other to surrender or they will each die. Tyrion steps closer, talking to Cersei. He tries to reason with her. She doesn’t care what he has to say. She has Missandei beheaded as they all watch in horror. Daenerys walks away with an angry and vengeful look on her face.