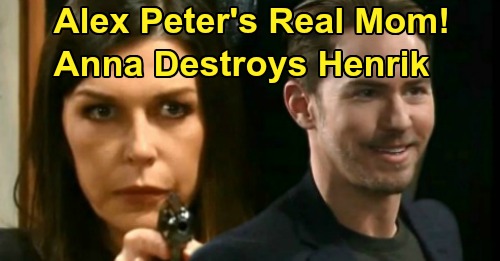 General Hospital (GH) spoilers tease that Peter August’s (Wes Ramsey) world could soon come crashing down. As GH viewers know, he’s got a lot of secrets and has gone to great lengths to keep his involvement with Helena Cassadine’s (Constance Towers) capture of Drew Cain (Billy Miller) from Afghanistan under wraps. He was willing to kill to keep his secrets hidden and so that he doesn’t lose his relationship with Maxie Jones (Kirsten Storms).

But now, unbeknownst to Peter, Anna Devane (Finola Hughes) has noticed a connection between him and the gunman who Peter hired to kill Andre Maddox (Anthony Washington) and Franco Baldwin (Roger Howarth) in the moments leading up to Franco’s memory reversal procedure. She’s a long way off from proving Jason Morgan’s (Steve Burton) theory about how Peter was responsible for Sam McCall (Kelly Monaco) being jailed, but she’s certainly onto something.

Of course, Anna doesn’t want to believe that Peter could be responsible for framing Sam for his own misdeeds, let alone the possible murder of someone. As GH viewers know, Anna thinks of Peter as her son, even though he may actually be Alex Devane’s (Finola Hughes) son. But that’s something she hasn’t shared with Peter, and she hadn’t planned on ever sharing it with him. But might that change?

General Hospital spoilers say it’s certainly looking like Anna may ultimately be the person who puts it all together and finds the real dirt on Peter, including the fact that he arranged for Andre to be stabbed several months ago and for Drew’s jet to go down overseas. And now that Sam has been released and Jason has a little more breathing room, he’ll probably put the pressure on Anna to keep digging into Peter’s possible misdeeds.

But of course that would depend on Anna actually taking her findings to the authorities, and she hasn’t decided whether she wants to do that or not. Hamilton Finn (Michael Easton) has urged her to hand over what she has found to the cops, but Anna is reluctant to do so. It would be much more like Anna to do a quiet investigation on her own, especially since she seems to be afraid of what she might find.

Of course, if and when Anna unfolds everything that Peter has done, she’s going to have some big decisions to make. She’ll hold not only Peter’s future in her hands, but Maxie’s as well, so one can imagine how gut-wrenching it will be for her to come forward with what she’s found. Perhaps she’ll approach Peter privately, rather than going to straight to the authorities, although that could cause some serious problems between her and Finn.

One can only imagine what a scene it’s going to be when Anna finally confronts Peter. Emotions will probably run high, and Anna might be tempted to reveal what she’s suspected for a long time – that Peter, or Henrik, is actually Alex’s son. And once Peter learns that information, who knows how he’ll react. He’s already concerned about having Cesar Faison (Anders Hove) as a father – will he totally go off the rails when he finds out that Alex may be his mother?

At any rate, Peter stands to lose both Maxie and his mother out of the deal, not to mention his livelihood and standing in Port Charles. Do you think Anna will be the one to bring Peter down? Stay tuned to the ABC soap and don’t forget to check CDL often for the latest General Hospital spoilers, updates, and news.