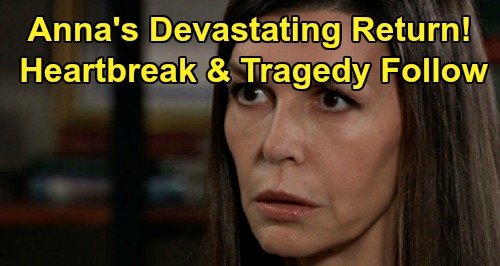 General Hospital (GH) spoilers tease that a long-awaited return is on the way. Anna Devane (Finola Hughes) is finally set to make a comeback for November sweeps. Hughes takes an extended hiatus every year, but this certainly seemed like a long one! Anna left for her Alex Devane Marick (Finola Hughes) hunt on May 31, so many of us are ready to get our Anna fix.

Fortunately, Anna’s absence actually worked well for the story this time around. Hayden Barnes (Rebecca Budig) returned to Port Charles and has turned Hamilton Finn’s (Michael Easton) world upside down. Not only did Finn have to deal with having his former love around, Hayden recently admitted she lied about her miscarriage.

Finn had a chance to meet his too-cute-for-words daughter, Violet Finn (Jophielle Love). He’s already been struggling without Anna around, so his surprise little girl is an added romantic complication. Anna’s coming back to a strained relationship as well as this shocking development in Finn’s life. That’ll give them some good drama to work with.

It’ll be interesting to see how this love triangle plays out in the weeks ahead. Finn and Anna are nice enough, but Michael Easton really pops on screen with Rebecca Budig. Sometimes you just strike gold in terms of chemistry and that special something that’s hard to define. Finn and Hayden simply work – especially now that they’ve got Violet to compete this adorable GH family.

Will Finn drift back in Hayden’s direction romantically? Time will tell, but he’ll definitely have to let his wounds heal first. Hayden hurt Finn deeply by lying to him, and he’s missed out on so much of Violet’s young life. Even so, Finn’s a forgiving guy and Hayden’s made it clear that she still loves him. There’s a good chance Finn will open his heart again to Hayden at some point.

As for Anna, General Hospital spoilers say her return will affect more than just Finn. We can’t forget that Peter August (Wes Ramsey) is running amok with all his dirty deeds and deception. The man is a menace and Anna needs to know! She’s grown to love Peter, but she can’t let that cloud her view as Peter’s dark secrets come to light.

General Hospital spoilers say Anna’s comeback could have deadly consequences in some cases and life-saving benefits in others. Several heroes and villains will be affected once Anna resurfaces, so stay tuned. We’ll give you updates as other GH news comes in. Stick with the ABC soap and be sure to check CDL often for the latest General Hospital spoilers, updates and news.