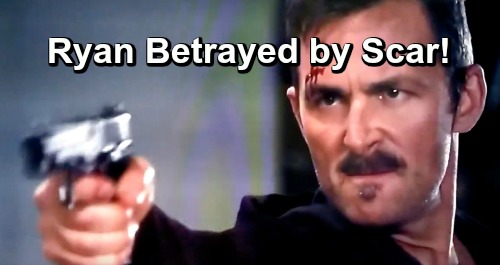 General Hospital (GH) spoilers reveal that Ava Jerome (Maura West) is missing on a crucial clue. Why hasn’t she ever noticed “Dr. Kevin Collins” aka Ryan Chamberlain (Jon Lindstrom) doesn’t have a bullet scar on his shoulder? The real Kevin has one, so Ryan’s scar-free status should really be a red flag.

A few years ago, Ava wound up on Cassadine Island with a group of other Port Charles residents. They were forced to escape the clutches of Huxley Lynch (Trent Dawson), a shady character who was trying to retrieve his supposed family heirloom, “The Weeping Nyad,” from Ava. Kevin was part of that storyline, which included Nikolas Cassadine’s (Nick Stabile) dramatic death dive out of a window.

GH fans will recall that Kevin followed Laura Webber (Genie Francis) on his own to the island. He jumped in front of her and took a bullet in the shoulder from “Theo Hart,” who General Hospital viewers came to know as Valentin Cassadine (James Patrick Stuart). That was certainly a memorable trip, so you’d think Ava would remember that there should be a bullet scar in her lover’s shoulder.

Ava was right there when Valentin shot Kevin. She told Laura that Nikolas was dead, which led to Laura’s fierce outburst followed by the gunshot – check out the video below. Since Ava had a clear view, why isn’t she putting all this together? Is it something that might dawn on her later or is it just something GH wants to gloss over?

General Hospital most likely is choosing to ignore history for the sake of current drama. If Ava solved the mystery the first time she spotted that scar-less shoulder, this wouldn’t be much of a story. It made sense to put Ryan and Ava together as love interests for this hot plot. The payoff will be huge when Ava discovers that her lover is a deranged serial killer who murdered her own daughter.

Ava may even make Ryan suffer the same fate for killing Kiki Jerome (Hayley Erin). General Hospital spoilers suggest that Ryan will land in some extremely tight spots down the road. His brother took a bullet in his shoulder, but Ryan might get one right in the heart! Could Ava resort to some murderous behavior of her own?

General Hospital fans won’t want to miss the thrilling twists and turns ahead. We’ll give you updates as other GH news comes in. Stay tuned to the ABC soap and don’t forget to check CDL often for the latest General Hospital spoilers, updates and news.