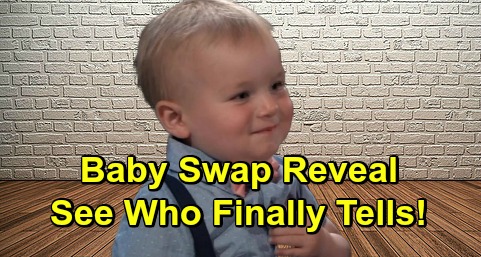 General Hospital (GH) spoilers tease that at some point, the baby swap storyline will finally come to an end. Exactly when Michael Corinthos (Chad Duell) will find out that his son Jonah Corinthos is alive and well is anyone’s guess at this point, but it certainly seems that TPTB are starting to build up to the big reveal.

Viewers have endured over a year of Jonah being in the possession of Brad Cooper (Parry Shen) and Lucas Jones (Ryan Carnes) and living life as Wiley Cooper-Jones. And we’ve seen Michael dote on his “godson” time and time again, but it’s time for the big reveal soon, and that begs an interesting question – Who’s going to bust the secret wide open?

There are several contenders here – some are those who are currently keeping the secret, and there are others who have been dangerously close to finding out the truth. Our bet is that one of them will bust the secret wide open and end up finally telling/admitting the truth to Michael about Wiley being Jonah.

First on our list of contenders is Liesl Obrecht (Kathleen Gati). She first learned the baby swap secret several months ago from Nelle Benson (Chloe Lanier). Recall that Liesl helped Nelle give birth to a healthy baby boy, and when she confronted Nelle about this later, Nelle spilled all the details about how she switched babies with Brad Cooper (Parry Shen) after the real Wiley died of Sudden Infant Death Syndrome.

Liesl has been wrestling with her guilt over the secret lately, and she nearly blabbed the whole thing to Franco Baldwin (Roger Howarth) when she was drunk on The Haunted Star. She went on about the baby’s “real father,” much to Franco’s surprise. And according to GH spoilers, she’ll soon make some remarks about Wiley’s father to Nina Reeves (Cynthia Watros).

At any rate, Liesl seems to be the top contender right now for spilling the Wiley/Jonah secret – she just seems to be itching to tell someone what she knows, and there’s really no big incentive for her to keep Nelle’s big secret.

And then we have Brad, who is ethically challenged but does seem to have a conscience, given all the angst he’s suffered over the past year due to the weight of keeping this secret. Surely he has an ulcer by now! Of course, much of his angst has been due to his strong desire not to get caught, but at some level he does feel bad about keeping Jonah from Michael.

But given how long Brad has held onto the secret, it doesn’t look like he’ll voluntarily give it up at this point. He’s just come too far and for too long to suddenly break and spill the details. Plus, he’ll face serious consequences – both legal consequences and Sonny Corinthos (Maurice

Benard) consequences. But if someone like Liesl were to back him in a corner somehow, he’d probably come clean.

Of course, now that Nelle’s back on canvas here and there, she might be the one to put an end to the baby swap saga. If Nelle were to find out that Shiloh Archer (Coby Ryan McLaughlin) was close to getting custody of Wiley/Jonah, she might decide to put an end to the matter by simply admitting the truth. Nelle has been clear all along that she wants Brad and Lucas to raise her son, and it that’s suddenly about to change, she could pounce.

The only problem here is that Shiloh’s wrapped up in a legal mess right now, but given that Shiloh’s pretty slippery and has excellent legal representation, he might actually beat the murder charges against him. It’s hard to imagine Shiloh being kept down for very long, no matter how unfair that may be.

Speaking of Shiloh, he must go on the list, too, as a contender to bust the Wiley/Jonah secret out of the water. If Shiloh does beat the charges against him, or even if he gets out of jail on bond for a while, you just know that he’s going to head right to the hospital to retrieve the results of the on-the-sly DNA test he ran on Wiley. He could have a major moment of shock when he finds out that he’s not the baby’s father – and he’d certainly go asking questions.

Last on the list is the psychic who’s been retained by Ava Jerome (Maura West) to “contact” Kiki Jerome’s (Hayley Erin) spirit. Since she’s been on canvas, she’s actually known some things that most people wouldn’t know. It could be an interesting twist if she bumped into Brad, Lucas, and Wiley and started getting “feelings” about Wiley not really being their son. It might be a bit far-fetched, but she could scare someone into coming forward, like Brad!

At any rate, there are plenty of possible characters who could lead to the truth coming out about Wiley/Jonah. Who do you think will ultimately bring out the truth and put an end to the baby swap storyline? Stay tuned to the ABC soap and don’t forget to check CDL often for the latest General Hospital spoilers, updates, and news.