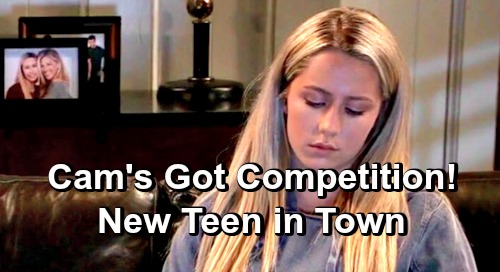 General Hospital (GH) spoilers tease that Josslyn Jacks (Eden McCoy) will keep trying to pick up the pieces. She was devastated by Oscar Nero Quartermaine’s (Garren Stitt), but she gathered her courage and honored his final wish. Josslyn performed at the Nurses Ball and even got a little glimpse of her angelic-looking boyfriend cheering her on.

That experience may have provided some closure for Josslyn, but it could also make things a bit tougher, too. Letting go can bring relief, but it can also bring more pain. Joss was prepared to lose Oscar, but his absence is still hitting her hard. As she copes with reality and accepts that Oscar is truly gone, it’ll inevitably bring additional challenges.

Fortunately, Joss has some great friends who can help her through this. Cameron Webber (William Lipton) and Trina Robinson (Sydney Mikayla) will be there for Josslyn as she navigates this period of mourning. She’ll slowly but surely heal and find a way forward, but it’s not going to be easy. Josslyn will face some setbacks here and there, but the important thing is to hang in there and press on.

General Hospital spoilers say Josslyn will grow closer to Cameron as she leans on him. Many GH fans expect Cam and Joss to become an item eventually. That’ll probably happen at some point, but there could be some competition in the meantime. It turns out someone else will enter the mix this summer, which could change the paths of the teen scene.

Some viewers have suggested that Spencer Cassadine (Nicolas Bechtel) should be SORASed a bit and recast, but GH may not want to lose Bechtel. The kid’s got plenty of fans and is uniquely Spencer. That doesn’t mean a recast won’t happen at some point, but it would be a difficult one to pull off.

We’ll throw out another option that might be fun. General Hospital spoilers say Sonny Corinthos (Maurice Benard) and Carly Corinthos (Laura Wright) will get a surprising visit this summer. It’ll shake things up for them, so who could show up out of the blue?

Back when Sonny searched for Dante Falconeri (Dominic Zamprogna) in Turkey, he got some help from a teen named Dev (Ashton Arbab). The character quickly impressed fans on social media. It’s also worth mentioning that Arbab is friends with McCoy in real life, so she could’ve put in a good word for him.

Many General Hospital viewers called for the show to add Dev to the teen group, so who knows? Maybe Dev could track Sonny down and provide some soapy explanation for seeking him out. Then again, GH may just add a brand-new teen we’ve never met before. Regardless, it sounds like Cameron may have to fight for Josslyn’s attention!