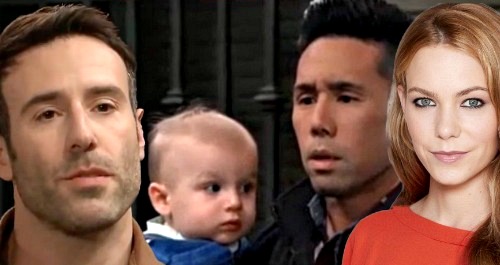 Many GH fans might have a problem with this story decision. It’s one thing for vulnerable Kristina Corinthos-Davis (Lexi Ainsworth) to buy Shiloh’s act. She’s always been a mess! Brad should really know better. Nevertheless, it does make sense to have Brad get dangerously close to Shiloh, the man who fathered Willow’s child. We’ll just have to forgive GH for dumbing the usually clever and scheming Brad down!

General Hospital viewers know Brad’s keeping a huge secret from Willow and almost everyone else. The real Wiley Cooper-Jones died during his first night at home, so Brad swapped him with Nelle Benson’s (Chloe Lanier) baby. Brad filled Julian Jerome (William deVry) in on part of the story, but Julian doesn’t know this kid is actually Jonah Corinthos.

Of course, Brad’s DoD involvement is a huge step toward the truth coming out. Michael is connected to every part of this storyline. He’s formed a bond with Willow, who will ultimately confess the adoption to him. Michael is also “Wiley’s” godfather and wants Shiloh as far away from Kristina as possible.

In other words, Michael will have every reason to get involved here, which could put him on a path to the baby swap shocker. However, it could be Jason Morgan (Steve Burton) who tips Michael off to trouble. General Hospital spoilers say he’ll find out something shocking on April 16. Jason will discover that Brad’s pledged his allegiance to DoD, so that’ll set off some alarm bells.

Michael will also put some clues together right around that time and express sympathy. After Willow confesses she gave a baby up for adoption, Michael will undoubtedly think about how weird she’s acted around Brad and “Wiley.” He should put it all together, which will be important once Jason reaches out with updates on Brad’s DoD involvement.