General Hospital Spoilers: Cameron and Jake’s Desperate Plan to Help Aiden – Brothers Team Up to Save Tormented Kid from Bullies 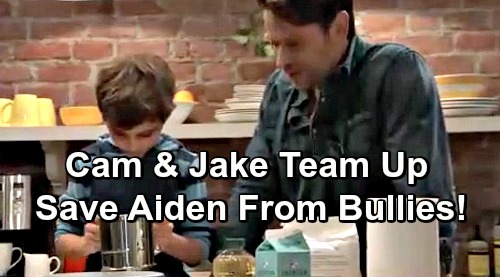 General Hospital (GH) spoilers tease that Cameron Webber (William Lipton) won’t be able to get his little brother off his mind. Cam truly cares about Aiden Webber (Jason David) and wants to help him through his ordeal at school. Aiden is clearly still being targeted. He keeps getting cruel messages on his tablet, including a recent one that called him “Gayden” and told him to get lost.

Charlotte Cassadine (Scarlett Fernandez) hopefully backed off like she promised, but her warning has probably come true. She’s not the only young student who’s capable of bullying. The whole class treats Aiden like an outcast for liking things that aren’t typical for a boy his age.

Elizabeth Webber (Rebecca Herbst), Franco Baldwin (Roger Howarth) and Willow Tait (Katelyn MacMullen) can all see that Aiden’s a kind boy who’s just a little different. They want to let Aiden be Aiden, which is certainly a good idea. Unfortunately, Aiden’s classmates will have a hard time embracing that mentality. They’ll need some help to make that happen and that’s where Cam comes in.

General Hospital spoilers say Cameron won’t want to sit back and do nothing. He’ll feel like there has to be a way to end Aiden’s tormenting once and for all. Cameron will realize he could use a partner on his latest scheme. He’ll turn to someone else who cares a great deal about Aiden.

Jake Webber (Hudson West) realizes Aiden tends to have a rough time in school. Once Cameron chats with him about it, they’ll be on the same page about helping their little bro. When a problem arises, these brothers have to stick together. GH fans can expect Cam and Jake to team up for a plot to help Aiden out. They might hope that Aiden’s favorite hobby can work to his advantage.

It turns out Aiden is basically a baking prodigy. That’s probably a girly, “uncool” thing to the rest of the boys in his class, but they surely like the end result. Who doesn’t love a fresh batch of something sweet, right out of the oven? Will Cameron and Jake plan something that revolves around Aiden’s talents in the kitchen?

General Hospital spoilers say Franco and Aiden will do some more baking next week, so there has to be a reason for the repetitive scenes. The first time around was to be cute and highlight what Aiden could do. The second time might involve baking cookies that’ll knock Aiden’s classmates socks off. Maybe they could come up with some special, creative recipe that would intrigue the other kids.

Regardless, Jake and Cameron will hope to save the day. Their hard work will undoubtedly pay off sooner or later. We’ll give you updates as other GH news comes in. Stay tuned to the ABC soap and don’t forget to check CDL often for the latest General Hospital spoilers, updates and news.