General Hospital Spoilers: Carly’s Baby in Jeopardy as Sonny and Shiloh Battle – Will Corinthos Kid Be Casualty of War? 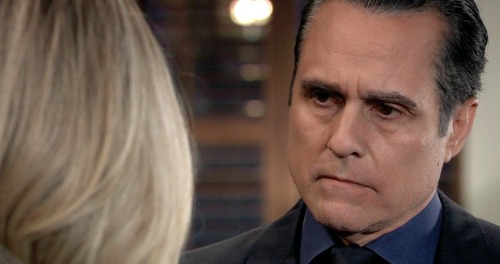 However, there may be no other way to free Kristina from this cult. Kristina simply refuses to listen to the people who care about her. She’s been brainwashed into putting total faith in Shiloh, so eliminating him may be the only thing that can stop her from following him.

GH fans saw Sonny’s anger boil over in Wednesday’s episode, March 27. He tried to reason with Kristina, but he raised his voice and hurled threats when that didn’t work. Sonny has no intention of letting Kristina continue down this dangerous road. He shouted, “If you think I’m going to let Shiloh or anyone else take away my daughter, then you have forgotten who I am!”

That was an awfully ominous statement, so it could mean bad news for Shiloh. General Hospital spoilers point to some trouble for this DoD leader in early April. If Sonny chooses to strike somehow, it could provoke the wrath of the entire community. Sonny is a powerful man, but Shiloh has an endless supply of programmed crazies who will gladly obey any orders they’re given.

It’s clear that Shiloh will do whatever it takes to save Kristina, but will he put another family member in jeopardy in the process? Perhaps even an unborn one? General Hospital viewers can’t forget that Carly Corinthos (Laura Wright) is pregnant. The stress of this nightmare alone is a concern, but things could get far worse than that.

Shiloh pretends to be all about the well-being of others, but he only cares about himself deep down. He could easily send someone to target Carly in retaliation – or do it himself and let somebody else take the fall. Shiloh seems like the kind of guy who’s capable of just about anything.

If nothing else, Carly could simply get caught in Sonny and Shiloh’s conflict as the battle heats up. Will Carly’s baby be a casualty of war? We’ll give you updates as other GH details emerge. Stay tuned to the ABC soap and don’t forget to check CDL often for the latest General Hospital spoilers, updates and news.

Join us on Tuesday (April 2nd) for a very special episode that celebrates the history and legacies of #GH. Don't miss out! #GH56 pic.twitter.com/0UAHUCvIg7