General Hospital Spoilers: Chase and Sasha Get Their Hearts Broken – Could You Support ‘Chasha’ After Michael and Willow Find Love? 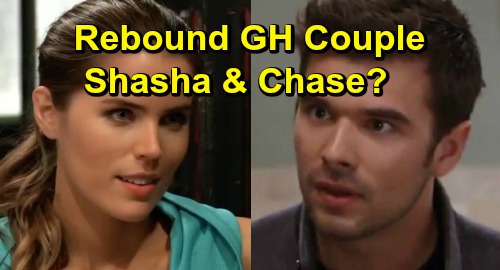 General Hospital (GH) spoilers tease that Michael Corinthos (Chad Duell) will come to Willow Tait’s (Katelyn MacMullen) rescue, which can only mean one thing. The love triangle centered around Willow is moving full-speed ahead. No one should be surprised since GH set this up from the very beginning. Willow was quite drawn to Michael thanks to the bereavement group meetings they both attended.

Michael and Willow helped each other open up, so they naturally bonded over their grief. Later, Michael realized Willow actually gave up her baby for adoption. He understood the complex situation and certainly didn’t hold it against her. Willow and Michael’s friendship has been strong enough to raise red flags for Nina Reeves (Michelle Stafford), so that’s another huge indicator.

Willow has grown to trust Harrison Chase (Josh Swickard), but there’s no escaping the emotional connection she’s formed with Michael. They’ll be even more connected after Michael stands up to Shiloh on Wednesday, May 22. Michael always likes to be there for damsels in distress, but things are a little different this time.

That’s because Willow is actually a kindhearted person, not a liar and a schemer. She’s the kind of gal Michael could truly form a solid relationship with. They’d probably be together right now if Michael had been gutsy enough to make his move. He was busy doling out seed packets at the elementary school while Chase was making adorable romantic powerplays.

Michael blew his chance, but he’ll inevitably get another one. General Hospital spoilers say Michael will become even more intertwined in the “Wiley Cooper-Jones” story, which is fitting since he’s the kid’s father. As for Willow, she’ll eventually experience the devastation of the real Wiley’s death. The truth could leave Willow leaning on Michael, who went through the same thing when he thought he lost Jonah Corinthos.

Of course, Michael probably won’t react well to current love interest Sasha Gilmore’s (Sofia Mattsson) fake daughter plot with Valentin Cassadine (James Patrick Stuart). Sasha may find herself completely alone, but could she find another handsome reason to stay in Port Charles? If Michael and Willow keep connecting, Chase could find himself single and looking for someone else in pain.

“Chillow” seems to have loads of fan support, so General Hospital may make Chase and Willow the endgame couple. However, there are no guarantees and Chase could easily get paired up in the meantime. Since Chase and Sasha could both become available, could you get behind them as a couple? They’re both attractive and in the right age range for each other, so it might be worth a chem test.

How would you feel about a “Chasha” pairing? Would you be open to it or has “Chillow” stolen your heart at this point? We’ll give you updates as other GH news comes in. Stick with the ABC soap and don’t forget to check CDL often for the latest General Hospital spoilers, updates and news.