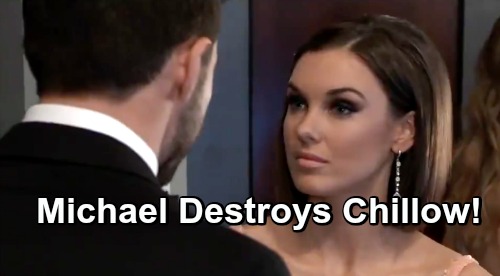 General Hospital (GH) spoilers tease that the show may want to shift gears on an important storyline. GH fans know Willow Tait (Katelyn MacMullen) thinks her baby is still alive. She’s going to be crushed when she ultimately realizes the real Wiley Cooper-Jones died the night he first came home.

Meanwhile, we’ve got Michael Corinthos (Chad Duell), who believes Jonah Corinthos is dead. In reality, Michael is the father of his own godson. He’s in for a very different kind of shock, but this revelation will inevitably bond Michael and Willow. They’ve already established a nice friendship, and it’s clear that there’s always been a little spark.

However, there’s a difference between a spark and the full-blown adorable fest that is “Chillow.” When Willow and Harrison Chase (Josh Swickard) first got together, they were OK but nothing too special. Many GH fans could take them or leave them initially, but something surprising happened between now and then.

It seems the actors found their groove as their characters’ story deepened. Willow is finally in a place of real trust with Chase, who’s incredibly smitten. Chase has truly fallen hard for the “school marm” as Dr. Hamilton Finn (Michael Easton) likes to jokingly call her.

Willow never thought she could be in a happy relationship like this after everything that happened with Shiloh Archer (Coby Ryan McLaughlin), but here she is. Chase gives Willow a sense of security that she’s never really known before. Most pairings with two kind-hearted characters can be boring, but Chase and Willow manage to rise above that challenge.

There are plenty of positive comments on social media about this cute couple. The recent sneak peek of the duo’s Nurses Ball performance has really left fans sold. One viewer said, “How adorable is this? #chillow #gh @josh_swickard and Katelyn McMullen take what could be too sweet of a pairing and make it super fun.” Another gushed, “They are ridiculously adorable.”

Of course, Chase and Willow can bring the heat, too! The first time they made love, it exceeded fans’ expectations. One GH watcher insisted, “Chillow had the hottest love scene on #GH in recent memory!” “Love my #Chillow,” said another view. “They are so cute and sexy. The more I see them the better.”

Based on how the story’s shaping up, General Hospital may plan on pushing Willow toward Michael after the big baby reveal. We’re all for drama that gives Chase, Willow and Michael a story, but sometimes you have to stick with the hottest chemistry and what fans are rooting for. Tearing “Chillow” apart completely seems like a waste.

Even if Willow drifts a bit, let’s hope “Chillow” will be the endgame. Michael can easily find someone else to love, even if things don’t work out with secretive Sasha Gilmore (Sofia Mattsson). Do you hope Chase and Willow can survive the love triangle ahead?