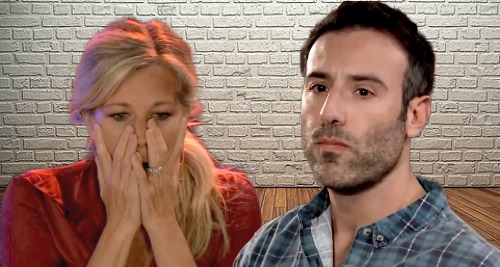 General Hospital (GH) spoilers tease that Shiloh Archer’s (Coby Ryan McLaughlin) determination will grow stronger. The harder Sam McCall (Kelly Monaco) and Jason Morgan (Steve Burton) try to take Shiloh down, the more cunning he’ll become. Shiloh doesn’t know Sam’s out to get him yet, but he’ll have to find out eventually. You can bet that news won’t go over well with this charismatic cult leader.

Of course, Shiloh will also learn the full story behind Kristina Corinthos-Davis’ (Lexi Ainsworth) kidnapping. Sonny Corinthos (Maurice Benard) has made it clear that Shiloh will be dealt with one way or another, but what if Shiloh gets to him first? GH fans know Shiloh will stop at nothing to get what he wants. He’s also not afraid of retaliation if the situation calls for it – which it may soon enough.

In a recent interview with Michael Fairman, Coby Ryan McLaughlin dropped some huge hints about what’s ahead. One clue was particularly intriguing – and it involves Carly Corinthos (Laura Wright). When asked which costar McLaughlin screen-tested with, McLaughlin revealed that it was Laura Wright. That’s interesting since so far, Carly hasn’t really been part of Shiloh’s storyline.

Carly is naturally connected to all this through Sonny, Kristina, Jason, Sam, and Michael Corinthos (Chad Duell). She cares about her stepdaughter and wants what’s best for her. However, Carly hasn’t been facing off with Shiloh or doing anything that would’ve supported doing a screentest between them…yet.

That could obviously change as time goes on, especially since Sonny’s putting a target on his back. Carly is now visibly pregnant, so this baby plot is moving right along. Will Shiloh end up going after Carly down the road? It’s definitely a possibility to consider, especially when you look at another hint from the interview.

“There are things going down right now (and I won’t spoil it) that are going to change the way he operates, and he is going to have to get what he wants in a different way,” McLaughlin said. “Some of the people who you would have thought that he trusted, have turned against him.”

General Hospital viewers have seen a creepy, mostly peaceful Shiloh who operates through manipulation and minions. A change would be turning into a truly vicious villain who resorts to violence himself if necessary. What better way to hurt both Jason and Sonny than by going after Carly? The stress of the situation could easily make Carly lose her unborn child – could Shiloh cause Carly’s miscarriage?