General Hospital Spoilers: Crazy Kim Refuses to Lose Franco – How Far Will She Go to Keep ‘Drew’ In Her Life? 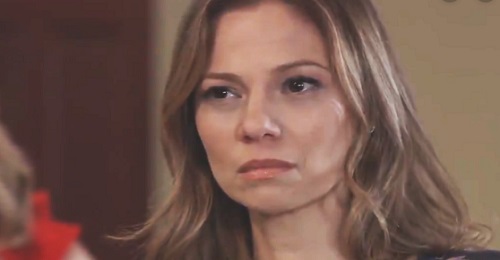 General Hospital (GH) spoilers reveal that Kim Nero (Tamara Braun) wants to have her cake and eat it, too. One minute Kim was on the phone ranting about Franco Baldwin’s (Roger Howarth) jam – obviously still desperate to run away together. The next minute Kim was trying to salvage her relationship with Julian Jerome (William deVry). She was treating him like a mere backup plan.

Fortunately, Julian wasn’t having it! He finally got the picture and determined that he couldn’t compete with this ghost of Drew Cain (Billy Miller). It’s like Kim’s been chasing a memory or perhaps stuck wondering “What if?” for all these years. Kim loves Julian on some level, but not enough to show him the loyalty and commitment he’s shown her. Julian was right to turn his back on Kim after getting burned one too many times.

Kim’s backup beau walked right out the door, she may turn her attention to Franco again. Since Franco sounds exactly like the Drew she used to know, he’s the man she truly wants anyway. It’s clear that Kim has a Drew obsession, which could spell trouble. That’s especially true when you combine it with Kim’s grief over losing Oscar Nero Quartermaine (Garren Stitt), which we certainly have sympathy for.

However, sympathy only goes so far. Kim can’t use Oscar as a blanket excuse when she makes mistakes that hurt others. Either Kim’s more manipulative than she’s willing to admit or she truly needs mental help. Perhaps it’s even a little of both, but General Hospital spoilers say Kim needs to recognize her issues regardless.

Kim’s been seeing a shrink, but she may need more assistance than just a few sessions here and there. Will Kim go off the deep end due to this Franco situation? Will she wind up in a mental institution as a result? It wouldn’t be too surprising, especially if GH decides they need an exit strategy.

Elizabeth Baldwin (Rebecca Herbst) is working hard to make sure her husband comes back to her. She refuses to retreat and just let Kim win. How far will Kim go to keep Franco in her life? If Liz starts getting through to Franco, what will Kim do to change Franco’s mind? No one would be shocked if Kim sabotaged the memory procedure somehow or pulled some other crazy stunt.

Kim may not even have to do much if she happens to be pregnant! She could always fake it though if she thinks that’ll help. General Hospital spoilers say this mess is only going to get messier, so don’t miss all the action. We’ll give you updates as other GH news comes in. Stay tuned to the ABC soap and don’t forget to check CDL often for the latest General Hospital spoilers, updates and news.