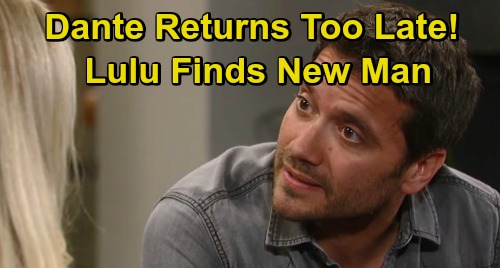 General Hospital (GH) spoilers tease that Lulu Falconeri’s (Emme Rylan) crisis is far from over. She survived a brutal attack, but that doesn’t mean her issues will be resolved anytime soon. Lulu is expected to make a full recovery physically, but what about her emotional state? She’s clearly not doing well at all.

Lulu starts to panic whenever thoughts of her real-life nightmare creep back in. She’s pushing herself in hopes of remembering her attacker, but it’s hard when the experience was so terrifying. It was one of the most horrible things Lulu’s ever had to endure.

Laura Webber (Genie Francis) has been incredibly supportive, so it’s nice that Lulu has her mom to back her up. However, it’s not the same as having her devoted hubby by her side. Lulu didn’t want to put Dante Falconeri (Dominic Zamprogna) at risk by trying to contact him. She insisted Dante should be left alone, but Sonny Corinthos (Maurice Benard) will probably pursue any leads he can find anyway.

As time goes on, Lulu will do her best to heal. That goes for both her body and mind. Unfortunately, Ryan Chamberlain (Jon Lindstrom) isn’t done inflicting pain on Lulu. The next time he targets her, it’ll be through hypnosis and false memories. Lulu will hold Franco Baldwin (Roger Howarth) responsible thanks to Ryan’s sneaky tactics, so that’ll be something else for her to fret over later.

Since Lulu will be partially to blame for the wrong man’s arrest, she should feel terrible once the truth comes out. If Ryan claims more victims between now and the end of his reign of terror, Lulu’s guilt will be even worse. It’s clear that Lulu has even more battles ahead of her, but who will carry her thought them?

Laura can help, but she’s still got her mayoral duties to think about. She’s a busy woman, so she can’t be there for Lulu round the clock. Lulu may begin to feel lonely and abandoned by Dante if he stays away too long. Perhaps Lulu will even lean on someone else in her time of need.

GH keeps stinging along the possibility of a Lulu and Harrison Chase (Josh Swickard) pairing. They have sweet scenes from time to time. Chase has fallen head over heels for Willow Tait (Katelyn MacMullen), but she’ll be drawn to Michael Corinthos (Chad Duell) in the coming months. Poor Chase may get his heart broken sooner or later.

Could Lulu and Chase come together when they really need each other? General Hospital spoilers suggest that Dante will end up held prisoner somewhere. It doesn’t look like it’ll be his fault that he stayed away so long, but the heart wants what he wants. Will Dante make it back to Lulu too late? Will too much have changed between them?

Dante and Lulu’s marriage could be on shaky ground down the road, so General Hospital fans will want to stay tuned. We’ll give you updates as other GH news comes in. Stick with the ABC soap and don’t forget to check CDL often for the latest General Hospital spoilers, updates and news.