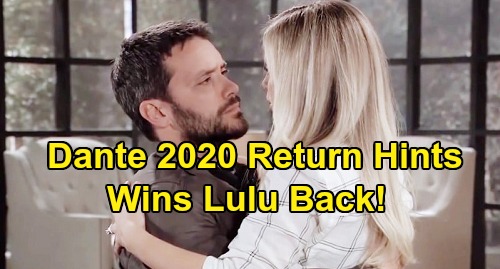 General Hospital (GH) spoilers reveal that one offscreen character recently got more mentions and some scenes built around him. GH fans know Olivia Quartermaine (Lisa LoCicero) was heartbroken when Dante Falconeri (Dominic Zamprogna) rejected her letters and wrote back to say she should stop writing. It breaks Olivia’s heart to think that Dante doesn’t know how much they love and support him.

However, Olivia understands Dante’s got some issues and feels her son only wants to protect them. Dante’s actions prove he still cares deep down. Just like with Lulu Spencer (Emme Rylan), Dante believes that cutting off contact is for the best. He feels like he’s sparing them greater pain by pushing them to give up on him.

Dante certainly doesn’t seem to think he can get past the brainwashing and difficult trauma he’s endured. He undoubtedly regrets going on that mission and ruining his life, but there’s still hope for the future. After all, GH is keeping Dante in the story.

General Hospital writers could’ve skipped this whole letter scenario and let everyone forget about Dante. Instead, Sonny Corinthos (Maurice Benard) urged Olivia to keep the letters since they’d mean something to Dante one day. The fact that Dante’s name is still coming up is quite interesting.

Could that be a sign that General Hospital will bring back the character? Will Dominic Zamprogna return or will the show recast? It doesn’t seem to be something that’s happening anytime soon, but they clearly wanted to leave the door open. GH could’ve killed Dante off or at least stopped mentioning him after he was in treatment. There are plenty of other offscreen characters who are never brought up.

Perhaps GH has a plan and wants to keep Dante fresh in viewers’ minds. It makes sense that they could have a potential Dante return in the works for 2020. It’s easy to imagine Lulu’s love story with Dustin Phillips (Mark Lawson) blooming in the months ahead. Based on the speed of most soap relationships, they might even be engaged or set to get married by fall of next year.

That might be the perfect time to reintroduce Dante to the canvas. A November sweeps 2020 shocker could be an excellent twist to build toward. Soaps have to think about things like this pretty far in advance, especially if it involves getting an actor back to the show.

It’s worth mentioning that Zamprogna’s schedule hasn’t exactly been packed since he left GH. According to IMDb, Zamprogna did a few episodes of a series called Tin Star and a short film called To the Moon and Back. There are no other projects listed, and GH buzz is that it’s possible Zamprogna would be open to a General Hospital return. It wouldn’t be the first time a soap star left, couldn’t find good opportunities and ultimately came back to the world of daytime dramas.

Then again, there might be some other handsome actor who could step up Dante’s replacement. Cynthia Watros has found her groove as Nina Reeves (previously played by Michelle Stafford), and many fans have embraced her at this point. She’s made the role of Nina her own, so a new guy could do the same with Dante if Zamprogna refuses to come back to General Hospital.