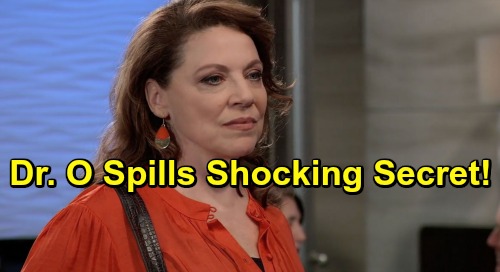 General Hospital (GH) spoilers tease that Sasha Gilmore (Sofia Mattsson) may regret her decision to stay in Port Charles. She recently told Valentin Cassadine (James Patrick Stuart) that she intended to make PC her permanent home, which he obviously wasn’t thrilled about.

However, Sasha has grown quite fond of Nina Reeves (Cynthia Watros) and has a nice romance with Michael Corinthos (Chad Duell) going. She’s not ready to give up her new life. Unfortunately, the beginning of the end may be drawing near. General Hospital spoilers say an old threat will resurface, and it could put the fake daughter secret in jeopardy.

On July 8, Dr. Liesl Obrecht (Kathleen Gati) will share something with Franco Baldwin (Roger Howarth). That’ll be the day of his wedding reception with Elizabeth Baldwin (Rebecca Herbst), so Liesl may score an invite and mingle a bit. Franco and Liesl have an unusual friendship, but they definitely have a connection.

Of course, Liesl tends to spend more time flirting with the dark side these days. That could present a problem since Franco is on the straight and narrow now. If Dr. O drops a hint about a secret involving Valentin or Sasha, that’s something Franco would worry about. He cares about Nina and wouldn’t want to see her get hurt.

We should point out that this isn’t the only secret Liesl knows. She’s also in the loop on Brad Cooper’s (Parry Shen) baby swap with Nelle Benson (Chloe Lanier) since she delivered Nelle’s child that night. Nevertheless, some other General Hospital spoilers suggest it’ll be the Sasha secret Liesl slips up on.

Liesl tends to gloat, so she may be unable to resist giving Franco a little clue about what she’s holding over Valentin. He probably won’t realize it’s a daughter impersonation plot, but he may turn this around on Liesl. GH spoilers say Liesl will eventually fear she’s said too much. She may clam up too late and leave Franco on a mission for answers.

On July 10, Sasha will make a significant choice. Will Franco back Sasha into a corner? Could she plan to flee Port Charles or tell Nina the truth and let the chips fall where they may? Those are some interesting options to consider. Then again, Sasha may decide to make a bigger commitment to Michael.

Franco could carry out his search for more info on the side or at least take what he knows to Nina. General Hospital spoilers say the crisis may be contained for a while longer, but things definitely aren’t looking good for Sasha and Valentin! You can bet Liesl will ultimately get some flak for keeping quiet as well.

It sounds like Liesl could set the catastrophe of the fake daughter reveal in motion, so don’t miss all the action. We’ll give you updates as other GH news comes in. Stay tuned to the ABC soap and don’t forget to check CDL often for the latest General Hospital spoilers, updates and news.