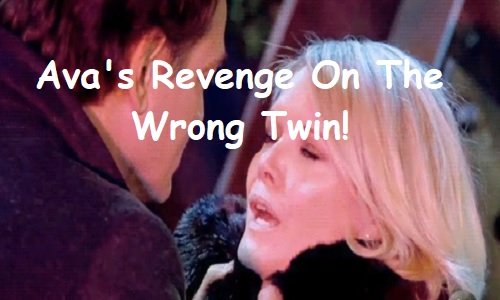 General Hospital (GH) spoilers tease that Ava Jerome (Maura West) will struggle to process the news about Ryan Chamberlain (Jon Lindstrom). Even after Jason Morgan (Steve Burton) saves her from a grim fate, Ava will have a hard time believing that was really Ryan. She truly thought she was in love with “Dr. Kevin Collins,” but Jason and Laura Webber (Genie Francis) will insist Ryan posed as his twin.

Ava will eventually concede that may be true, but she’ll suggest the switch must’ve happened recently. She’ll think that explains why “Kevin” was suddenly exhibiting such twisted behavior. However, Laura and Jason will argue that Ava’s wrong again. They’ll assure her that the real Dr. Kevin Collins (Jon Lindstrom) has been locked up in Ferncliff this whole time.

General Hospital spoilers say Ava will start to spiral. She’ll reel over believing she was engaged to an esteemed doctor and devoted groom-to-be. Instead, Ava was about to marry a killer – her DAUGHTER’S killer! That part will be the worst of all this. Ava will feel like she brought a lethal monster into Kiki Jerome’s (Hayley Erin), so she’ll use alcohol as a coping strategy.

It won’t be long until Ava’s drunk and meandering over to GH for a confrontation. Since Ryan’s body won’t surface in the icy river, Ava will think he could still be out there somewhere. She’ll believe Ryan might’ve eventually been discovered and rushed to the hospital.

Ava will find Franco Baldwin (Roger Howarth) and fill him in on her earlier showdown. She’ll sit on the foot of his bed and gaze at the bling Ryan bought her. Ava will note that it was her first ever engagement ring. She’ll make it clear that she absolutely loathes the man who gave it to her.

As Ava seethes, Franco will point out that she seemingly wants Ryan to still be alive. She’ll admit that’s the case since she’d rather kill him herself. Soon after, Ava will stagger down the hall and run into Kevin. In her inebriated state, Ava won’t be able to tell the difference between Kevin and his evil twin brother.

General Hospital spoilers say Ava will believe Kevin is Ryan, so she’ll rip into him with everything she’s got. Kevin will undoubtedly try to explain, but it’ll be no use. Ava will be far too drunk to listen – and besides, she’s been duped before!

During these heated moments, Ava will realize Ryan not only killed Kiki, but he went to bed with her for the first time that night. She’ll determine that Ryan drained the life out of her beloved daughter and immediately came over for sex. Ava will have enough rage to do serious damage. Will Kevin be in danger thanks to Ava’s drunken mission for vengeance?

General Hospital fans won’t to miss the shockers ahead. We’ll give you updates as other GH details emerge. Stay tuned to the ABC soap and don’t forget to check CDL often for the latest General Hospital spoilers, updates and news.