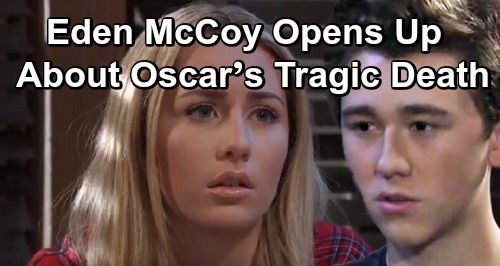 General Hospital (GH) spoilers reveal that Josslyn Jacks (Eden McCoy) is bracing for devastation, but she can’t truly be prepared for what’s ahead. The aftermath of Oscar Nero’s (Garren Stitt) death won’t be Joss’ first rodeo when it come to grief, but it’ll be different this time. Josslyn struggled to deal with the death of her brother, Morgan Corinthos (Bryan Craig), but Oscar’s demise will hit her heart in another place.

Since Oscar was Josslyn’s first love, she’ll be dealing with some new emotions and difficulties. In an interview with ABC Soaps in Depth, Eden McCoy previewed the deadly drama ahead and discussed how she feels about this GH storyline. It’s definitely been a buzzworthy one for General Hospital.

McCoy noted that she always wanted some material she could sink her teeth into. Thankfully, this hot plot provided that. “Now I’ve been diving into it for six months straight, bawling my eyes out at work every single day,” McCoy said. “It’s been challenging and dark, but I love doing the heavy stuff. You learn so much, and I’m grateful that the writers trusted me with this storyline.”

It sounds like McCoy’s gotten some solid feedback on her work. Although it’s tough to say goodbye to Oscar, many people have lost loved ones due to a similar situation or can relate to losing a young family member. “It’s touching so many people and so many lives,” McCoy said. “That’s what’s really special.”

McCoy also offered some interesting tidbits about her costars. She suggested Garren Stitt has tried to balance out the heavy material by keeping things light when the cameras stop rolling. William Lipton (Cameron Webber) has a funny side, too. McCoy insists Lipton is far more innocent than the character he portrays, so she’s always entertained when he becomes mischievous Cam on set.

It’s great that these teens still have fun in the midst of this demanding story. Even so, McCoy admitted she can’t seem to show much emotion when she leaves work behind. “When I get home, I can’t smile or cry for the life of me,” McCoy said. “I don’t care about anything. I’m just a potato.”