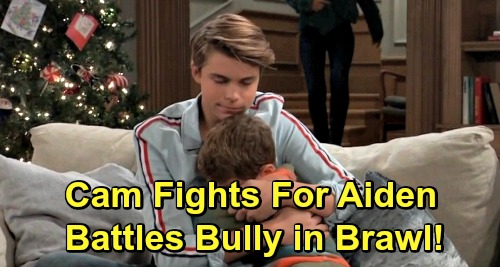 General Hospital (GH) spoilers tease that Cameron Webber (William Lipton) will step up for his little brother. The drama will start with a heated showdown at school. GH fans know Cam’s supposed to be following the rules and trying to stay out of court. One wrong move and the judge could throw the book at him.

However, Cameron just won’t be able to keep his mouth shut when a bully calls Aiden Webber (Jason David) a derogatory name. He’ll fume over the homophobic slur, so get ready for fists to fly. General Hospital spoilers say Cameron will defend Aiden in this fierce fight, which is both sweet and probably not the best idea. Again, Cam’s got a lot riding on his ability to steer clear of trouble.

Nevertheless, trouble tends to follow Cameron wherever he goes and that’ll certainly be the case this time. We can only hope that Cam and the other fight participant just walk away with their wounds. As long as the authorities aren’t alerted, Cameron should be all right.

Of course, Cam will still have to address this issue with Elizabeth Baldwin (Rebecca Herbst) and Franco Baldwin (Roger Howarth). They won’t be pleased that Cameron got into a physical confrontation, but they may soften a bit when they learn this was about protecting Aiden. Franco and Liz will just want Cam to use his words instead of throwing punches.

General Hospital spoilers say Cameron will be taken aback when he learns “Friz’s” latest suspicions. It’s too early to guess or assume anything about young Aiden’s sexuality, but Liz and Franco will admit he might identify as gay one day. Cam won’t quite have the reaction Franco’s hoping for. It sounds like Cameron will suggest life’s going to be more difficult for Aiden instead of just expressing support.

Cam obviously loves Aiden and wouldn’t judge him for who he loves in the future. His concern may come from a genuine place, but Franco will unload some anger on him. General Hospital spoilers say Cameron will fire right back, so expect an intense faceoff next week.

Liz will also scold Cam for not having the proper reaction, but this family will just have to hang in there. They’ll all have plenty of problems to work through in the coming months. We’ll give you updates as other GH news emerges. Stick with the ABC soap and don’t forget to check CDL often for the latest General Hospital spoilers, updates and news.