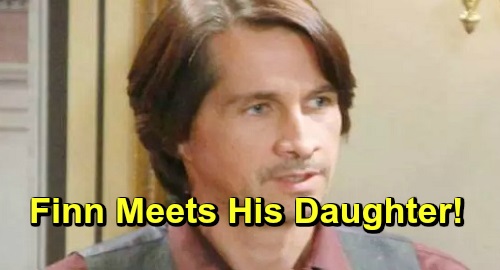 General Hospital (GH) spoilers tease that Hayden Barnes’ (Rebecca Budig) plan will fall apart. After Hayden left town, she decided it’d be better for everyone if she just lied to Hamilton Finn (Michael Easton). She wrote a letter claiming she miscarried and moved on with her life.

Hayden would’ve come clean if Finn had shown up in Rome, but now she’s once again determined to keep their daughter a secret. Of course, GH fans know secrets never stay secrets forever. In a recent issue of Soap Opera Digest, Co-Head Writers Chris Van Etten and Dan O’Connor spilled what’s ahead in this story, which is sure to bring backlash for Hayden.

As we move closer to the big reveal, Hayden’s concerns will grow stronger. She’ll sense that Finn’s getting too close to the truth, so that’ll leave her reeling. “Hayden’s panic has gone from simmer to boil, but it is not yet overflowing,” Van Etten said. “She has maintained a couple covers for her situation and Finn has yet to confront her directly about it.”

However, there’ll come a day when Finn indeed confronts Hayden – and that’s when the panic overflow will come! Hayden will ultimately be backed into a corner, which should force her into a confession. Over the next few weeks, General Hospital spoilers say Finn will keep gathering puzzle pieces. It’ll take some time to put them all together, but Finn’s a smart guy. He’ll inevitably figure out his kid’s still alive, even if someone has to help him out a bit.

Finn will work to “see the full truth about what Hayden is hiding,” according to O’Connor. “Hayden’s secret and Finn’s investigation are heading for a collision course.” General Hospital spoilers confirm that Finn will indeed meet his little girl this fall, so his digging will pay off. GH viewers will definitely look forward to her first appearance.

Naturally, that won’t be the end of this storyline. From there, Finn and Hayden will have a lot to sort out. There’ll be conflict over Hayden’s deception as well as her motives. They’ll also have to determine a custody arrangement – or prepare for a custody battle if it comes to that.

Bottom line, this hot plot will bring plenty of drama and it’ll all start with Finn’s snooping. It sounds like GH will unravel this mystery during November sweeps, so don’t miss all the shockers. We’ll give you updates as other as news comes in. Stay tuned to the ABC soap and don’t forget to check CDL often for the latest General Hospital spoilers, updates and news.