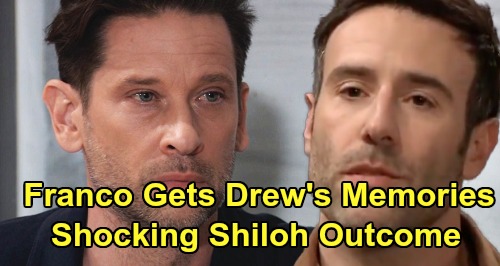 General Hospital (GH) spoilers reveal that the ABC soap seems to be using a bit of misdirection. GH fans know Franco Baldwin (Roger Howarth) has received two cryptic warnings. The first came from Sibley Gamble (Veronica Cartwright), who suggested Franco wouldn’t be feeling like himself soon. The second came from Chelsea Lambas (Jen Ray), who warned Franco not to take that drive.

Let’s think about the wording of that second warning. Don’t take THAT drive refers to a specific drive. Franco’s worried about what might happen behind the wheel, but it looks like this involves Drew Cain’s (Billy Miller) flash drive instead. It makes sense considering Franco opened up to Drew about this just before they had a memory discussion.

Drew hated that he couldn’t remember what happened in Afghanistan since it could potentially neutralize Shiloh Archer (Coby Ryan McLaughlin). However, he suggested he still isn’t willing to put his new memories on the line. Drew can’t bear the thought of not remembering his kids and the times they shared together. Even so, the flash drive isn’t something Drew wanted to part with.

Now the flash drive’s in Shiloh’s hands, so it appears Franco’s going to enter the mix. A dangerous opportunity may arise that leaves Franco with a choice: do nothing or take that drive and go against Chelsea’s warning. It’s easy to guess what Franco will choose! It sounds like Franco will try to save the day by stealing the flash drive back, but that decision should bring consequences.

Things won’t go well for Franco, especially since Sibley said he wouldn’t be feeling like himself soon. This memory-mapping procedure is meant for twins, but the setup is pretty obvious here. Jason Morgan’s (Steve Burton) brain damage disqualifies him as a candidate. Somehow Franco will likely be the one imprinted with Drew’s memories. That could put Franco at risk of losing the memories he’s made with Elizabeth Webber (Rebecca Herbst) and her boys.

This would certainly be the ideal way for Franco to not feel like himself. He would feel like Drew instead. It’d also be a way to derail his “Friz” family bliss, which viewers know is Franco’s worst fear. General Hospital spoilers point to a major crisis at GH soon. Liz will watch a sleeping Franco, which suggests he’ll be in bad shape as a patient.

Later, Liz and Drew will be absolutely floored by something. We’re betting they’ll be shocked to learn Franco now has Drew’s memories! Franco could be the key to bringing down Shiloh, which could finally earn him a kind word or two from Jason down the road.