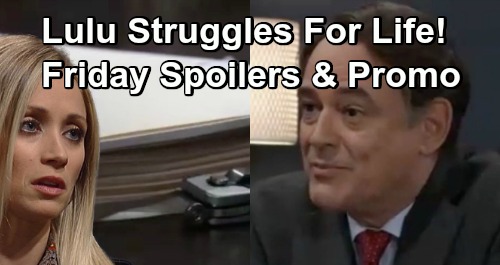 General Hospital (GH) spoilers for Friday, January 18, tease that Ava Jerome (Maura West) will be in good spirits. At GH, she’ll tell someone she’s not going anywhere. Perhaps “Dr. Kevin Collins” aka Ryan Chamberlain (Jon Lindstrom) will suggest meeting up after he takes care of something. Then again, he may want to be sure Ava won’t take off on her own. After all, Ryan planted this idea of leaving town in her head.

Regardless, Ava will assure “Kevin” that she wants him in her life – wherever they choose to live it. Ryan will hope they can pick somewhere far away from Port Charles, but he’ll have to take care of two pesky problems first. Carly Corinthos (Laura Wright) and Sonny Corinthos (Maurice Benard) made it on Ryan’s murder list, so he’ll plan to lure them to Morgan Corinthos’ (Bryan Craig) grave and strike.

General Hospital spoilers say Sonny won’t really be on board with this unconventional therapy session. Of course, Carly usually gets she wants. She’ll beg until Sonny caves in and signs up for the eerie graveyard meeting.

However, Ryan’s scheme will take a shocking turn. He’ll have a knife ready to do bloody Corinthos damage, but Lulu Falconeri (Emme Rylan) will force him to shift gears. In Friday’s episode, Lulu will realize Kevin has a list of Ryan’s murder victims. She’ll ponder why during a chat with Laura Webber (Genie Francis), but she’ll ultimately decide only “Kevin” can answer that.

General Hospital spoilers say Lulu will phone “Kevin” and ask to see him. When she mentions the reason, Ryan will know what he has to do. GH fans can probably expect a vicious attack on Lulu’s life. It looks like she’ll struggle to hang on during next week’s new GH episodes, January 21-25, so her friends and family members are in for a rough time.

Until then, Nina Reeves (Michelle Stafford) and Maxie West (Kirsten Storms) will have an intense moment. As guests gather for the book event, Nina will push Maxie to be completely honest with her. Maxie will look a tad guilty – or at least reluctant. She may know something that could hurt Nina or anger her in some way. General Hospital spoilers say Maxie will have to decide what she’s going to spill.

Over with Harrison Chase (Josh Swickard), he’ll tell Willow Tait (Katelyn MacMullen) that he put everything on hold for her. Chase will want to give Willow his undivided attention. That plan should change once Ryan wreaks havoc again!

It sounds like another hot episode’s ahead. We’ll give you updates as other GH news comes in. Stay tuned to the ABC soap and don’t forget to check CDL often for the latest General Hospital spoilers, updates and news.