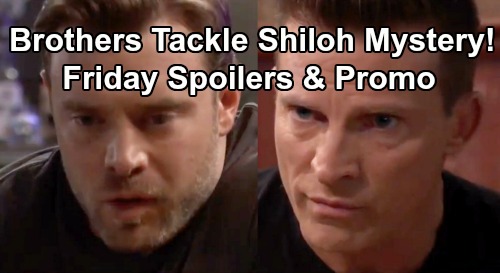 General Hospital (GH) spoilers for Friday, July 19, tease that Curtis Ashford (Donnell Turner) and Jordan Ashford (Briana Nicole Henry) will take a trip to Pentonville where they’ll have a conversation with Ryan Chamberlain (Jon Lindstrom). Exactly what they’ll discuss remains to be seen, but it looks like Ryan may want to chat about the whole kidney transplant ordeal, which resulted in him being minus one kidney – something he’s awfully bitter about.

Ryan may throw some threats around, as he likes to do, and Curtis will threaten right back. He’ll let Ryan know that he’s capable of going to extremes – something that Ryan knows well as this point. Perhaps Ryan will want something in exchange for keeping the kidney swiping secret – after all, Ryan nearly always has some sort of agenda at play. GH spoilers say that Jordan will be left shaken by the exchange.

Meanwhile, Nina Reeves (Cynthia Watros) will be feeling terribly guilty. She’s just figured out that it was thanks to her big mouth at The Nurses’ Ball that Shiloh Archer (Coby Ryan McLaughlin) discovered the existence of Wiley Cooper-Jones. Nina feels awful for Willow Tait (Katelyn MacMullen), and she’ll approach Willow with an apology. We’ll see if Willow accepts the apology or not.

Speaking of Willow, she’ll pay mom Lorraine “Harmony” Miller (Ingo Cadranel) a visit in jail. These two will have some catching up to do about the whole Shiloh situation. Now that Harmony has decided to turn against Shiloh, Willow will want to make sure that Harmony is 100% committed in her new stance against the cult leader. She’ll beg Harmony not to let Shiloh manipulate her again and assure her that Shiloh going down is best for everyone.

Next, on the new episode of General Hospital on Friday, July 19, Drew Cain (Billy Miller) will be feeling unsettled about the Shiloh situation as well. He was peeved that Shiloh dared to show up at Oscar Nero Quartermaine’s (Garren Stitt) will reading and he’ll be wondering about his past connection to the man.

Drew will approach Jason Morgan (Steve Burton) with his Shiloh concerns. Namely, he’ll be wondering why Shiloh went out of his way to reconnect with him when he first came to Port Charles. Since Drew doesn’t remember his past with Shiloh, who was then known as David Henry Archer, he might enlist Jason’s help in digging around in the past.

Other General Hospital spoilers indicate that Shiloh will be out of jail, most likely on bond, and he’ll be feeling desperate. Of course, he’s facing some serious charges and has lost all legal grounds to pursue Wiley. But one thing that GH viewers know is that when Shiloh gets desperate, he lashes out.

General Hospital spoilers say that it looks like Shiloh will end up having words with Laura Collins (Genie Francis). Mayor Collins will probably be hoping that Shiloh will leave the people she cares about alone, but Shiloh will let her know in no uncertain terms that he’s not going to be going anywhere. He’s lost a lot lately and will likely have revenge on his mind.

It looks like Shiloh might also pay a visit to Kristina Corinthos-Davis (Lexi Ainsworth) at Charlie’s Pub, as the Friday GH previews show her angrily telling someone that she’s going to make him pay. She’ll be left shaken after the tense exchange. Shiloh sure is piling up a big list of enemies these days!

Meanwhile, Elizabeth Baldwin (Rebecca Herbst) and Hayden Barnes (Rebecca Budig) will have a chat about Hamilton Finn (Michael Easton), during which Liz will fish for information on Hayden’s feelings toward her ex. So far, Hayden has acted pretty cold and distant with Finn, and Liz will probably be puzzled by that. We’ll see what Hayden has to say.