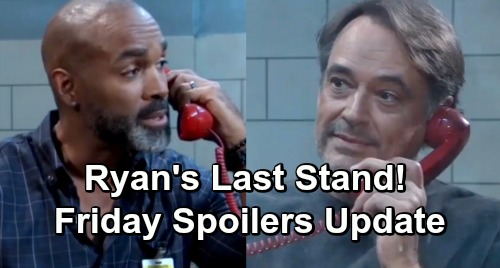 General Hospital (GH) spoilers update for Friday, July 19, tease that Drew Cain (Billy Miller) will sit down with Jason Morgan (Steve Burton) to discuss Shiloh Archer (Coby Ryan McLaughlin). Drew’s been unnerved by Shiloh from the moment Shiloh first approached him with stories about their past together in Afghanistan – which is a past that Drew doesn’t remember.

Drew hasn’t trusted Shiloh from day one, and now that things have settled down after Oscar Nero Quartermaine’s (Garren Stitt) death, it looks like Drew will want to pick back up on this Shiloh mystery. Drew will recall for Jason how Shiloh went out of his way to reconnect with him when he first showed up in Port Charles, and it won’t sit well with Drew.

It looks like Drew and Jason might work together to get to the bottom of Shiloh’s angle with Drew. And they’d be right to do so, since other General Hospital spoilers for Friday indicate that Shiloh will manage to get out of police custody, probably on bail. Even though he’s got considerable legal problems ahead of him, he seems hell-bent on causing as much havoc as possible.

Meanwhile, on the new episode of GH on Friday, July 19, Ryan Chamberlain (Jon Lindstrom) will have some words for Curtis Ashford (Donnell Turner) and Jordan Ashford (Briana Nicole Henry). The couple will wind up talking with Ryan from jail, and it looks like the conversation will be intense. As GH viewers know, Jordan has one of Ryan’s kidneys, but Ryan didn’t consent to the transplant.

Instead, Curtis, Hamilton Finn (Michael Easton), and Kevin Collins (Jon Lindstrom) orchestrated a plan whereby they forged Ryan’s consent to the transplant. It was a risky plan, but it worked, and even though Ryan has complained about what took place, nobody believes his version of events. And that’s likely left Ryan quite irritated.

It would be just like Ryan to throw some threats around, and he could even threaten Jordan and Curtis’ lives. In fact, it would be just like Ryan to let them know in no uncertain terms that if he ever busts out of prison, then he’s coming after them first. GH spoilers say that Jordan will be shaken after their little chat, so we should expect some harsh talk from the serial killer.

Of course, since the likelihood of Ryan ever managing his way out of prison is slim to none, Jordan probably won’t be shaken for long. But she might be seriously worried about the legal consequences for Curtis if anyone were to ever find out what he did with respect to securing her kidney from Ryan. And that’s how Ryan might pose a real danger to the couple.