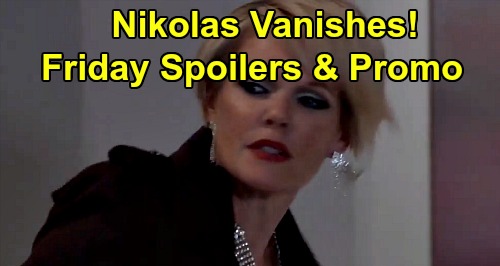 Of course, the gallery is also where the new Nikolas Cassadine just revealed his face to Ava. Marcus Coloma is now playing the role of Nikolas, so this will definitely give General Hospital fans something to talk about. As for Ava, it appears she may pass out from the shock of it all. Ava will be hunched over her desk when she suddenly jolts up and gasps out Nikolas’ name.

Back with Laura, General Hospital spoilers say she’ll battle doubts. Will Laura arrive at the gallery after Nikolas has vanished? Ava might seem nuts if she claims a presumed dead man unmasked himself there! Nevertheless, that’s exactly what happened and Laura should get confirmation from Jax soon. 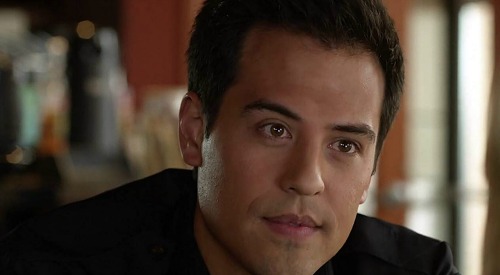 As for Josslyn Jacks (Eden McCoy), she was just confronted by Lulu Spencer (Emme Rylan). Since Joss was busying throwing up over the side of The Haunted Star, it’s pretty easy to see she’s plastered, too. GH spoilers suggest Joss will own up to what she’s done and prepare to face the consequences.

Later, Dev Cerci (Ashton Arbab) will have a tense chat with Sonny Corinthos (Maurice Benard). General Hospital spoilers say Sonny will grill Dev about tonight and wonder if there’s anything he’s leaving out. It’s possible Sonny will suspect Dev stole the liquor or even indulged and got away with it. However, Dev is innocent in all this. He’ll hopefully be able to convince Sonny his hands are clean.

Across town, Sasha Gilmore (Sofia Mattson) will lash out at Michael Corinthos (Chad Duell). She’ll insist she knows what Michael’s doing and wants him to stop. Michael has no intention of letting Sasha go down for the fake daughter scam when Valentin Cassadine (James Patrick Stuart) orchestrated it. He’s been threatening Valentin, but Sasha will want Michael to back off.

Sasha made her choice when she opted to deceive Nina again. She doesn’t want to cause more drama, so she’ll push Michael to back off. Over with Julian Jerome (William deVry), he’ll continue to create waves for Brad Cooper (Parry Shen) and Lucas Jones (Ryan Carnes). Brad will eventually have a conversation with Carly Corinthos (Laura Wright), who’ll naturally be protective of Lucas.

Carly will warn that the ball’s in Brad’s court and add that he should play it wisely. She won’t want Brad to blow up his marriage with secrets, but it’s a little late for that! Brad’s issues are only going to get worse since he’s covering up a baby swap.