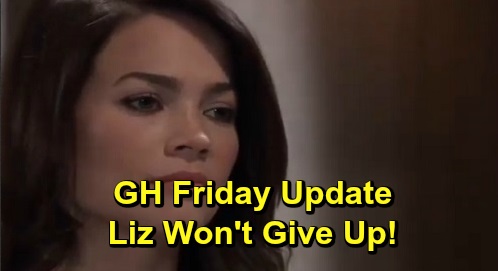 General Hospital (GH) spoilers update for Friday, September 27, teases that a thorough investigation will be done. Shiloh Archer (Coby Ryan McLaughlin) finally met his maker after Sam McCall (Kelly Monaco fired a flare gun into his back, which sent him tumbling into the water below. Of course, Jason Morgan (Steve Burton) will also have to talk about the shot fired from his own weapon.

However, GH fans know that’s not what happened and that’s what Diane Miller (Carolyn Hennesy) will argue, too. She’ll insist this was a clear case of self-defense, so she’ll want Jordan to stop the witch hunt already. Shiloh was a menace to society, and the soap world’s a far better place now that he’s gone.

General Hospital spoilers say Jason will play Sam up as a hero. He’ll point out that Sam saved his life and for that’s he’s eternally grateful. Over with Dev Cerci (Ashton Arbab), he’ll have another chat with Sonny Corinthos (Maurice Benard). Sonny will assure Dev that he cares and intends to watch out for him. He’ll just want Dev to come to him if he ever has concerns or a dilemma pops up.

Next, Josslyn Jacks (Eden McCoy) will confide in Carly Corinthos (Laura Wright) at home. She won’t want Carly blaming Dev for the issues she’s dealing with. Joss will contend that she’s the problem here, which could lead to another conversation about her grief. It’s like Josslyn is stuck spinning her wheels in this dark pit of mourning.

Things should get better for Joss in time, but Trina Robinson (Sydney Mikayla) will worry for now. She’ll tell Cameron Webber (William Lipton) that Josslyn’s losing it, but he may want Trina to cut her some slack. Josslyn may not be quite herself lately, but she’s not doing anything that outrageous. She’s just a friend who’s going through a crisis, so Cam will think they have to keep giving her support.

Other General Hospital spoilers say Franco Baldwin (Roger Howarth) will grow frustrated. He’ll be sick of Elizabeth Baldwin’s (Rebecca Herbst) battle to bring back her husband. Franco will insist that battle’s already over and Liz lost, but she won’t go for that idea. For Liz, there’s always going to be hope for a “Friz” family reunion.

Elsewhere, Laura Webber (Genie Francis) will lash out at someone and show some authority. Madam Mayor won’t be messing around! Finally, Olivia Quartemaine (Lisa LoCicero) will get some troubling news from Julian Jerome (William deVry). He’ll inform her that his relationship with Kim Nero (Tamara Braun) has imploded, so it seems the deal’s off. Julian isn’t moving to Manhattan, which means he can keep running Charlie’s Pub as usual.

Olivia will react angrily, but will it because of the botched deal or Kim’s behavior? She was excited about the pub purchase since Leo loves the place and she was finally getting her pizza oven. Nevertheless, it’s tough to believe Olivia would really pitch such a fit about losing it. Maybe Olivia’s rage will mostly be directed at Kim. She’s not exactly in Julian’s cheering section, but Kim still did him dirty.