General Hospital Spoilers: GH Alum and The Bold and the Beautiful Star’s Plea for Help – Calls for Soap Fans’ Support 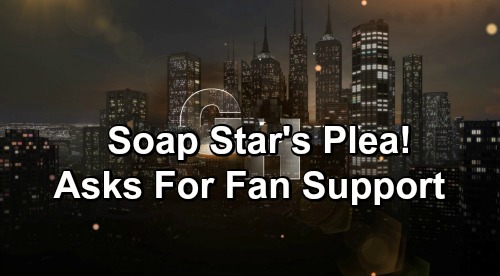 General Hospital (GH) spoilers reveal that one soap star needs your help! Sean Kanan plays Deacon Sharpe on The Bold and the Beautiful as well as A.J. Quartermaine on General Hospital. He recently sent out a tweet in hopes of drumming up some support.

Kanan and his team have put together a Facebook page for a book he co-authored with Jill Liberman called Success Factor X Book. Since the page is new, there isn’t much activity and Kanan wants to fix that. Of course, that’s why he’s turning to soap fans for assistance. They’re a loyal bunch, so many of Kanan’s supporters will undoubtedly want to pitch in.

Kanan sent out a tweet to explain the situation and ask if fans wouldn’t mind helping out. It’d mean a lot to him if you did! In return, Kanan promised some interesting content from the page soon enough. He’s counting on fans to get the ball rolling on their Facebook endeavor.

“Hey guys,” Kanan said. “We are building our FB page. Would you please friend us? We will be populating the page over the next few days & will have all things Success Factor X 4 you.” Numerous fans did exactly what Kanan asked and told him so on Twitter. He offered several replies of gratitude, but he still needs more help! Let’s hope things work out for Kanan and his book crew.

Meanwhile, The Bold and the Beautiful viewers will continue to wait patiently for Kanan’s return as Deacon. There’s no word on it happening so far, but there’s always a chance it’ll happen down the road. It’d be great if Deacon could reenter the picture to shake up Quinn Forrester’s (Rena Sofer) world again and be there for his daughter, Hope Spencer (Annika Noelle).

Since Florence “Flo” Fulton (Katrina Bowden) is getting close to Hope and happens to look somewhat like her, there’s even be speculation that they’re sisters. It’d make sense considering Flo’s mom, Shauna Fulton (Denise Richards), is coming to town with a secret about her past. If Flo turned out to be Deacon’s daughter as well, that’d be an exciting story for Kanan to be part of.

Time will tell if that ever happens, but The Bold and the Beautiful spoilers say some serious Flo chaos is looming. Fans of General Hospital would love to see a Sean Kanan return but it would have to be in either a retrospective or dream since the talented fan favorite was killed off by Sonny Corinthos (Maurice Benard). Stay tuned to the CBS soap and don’t forget to check CDL often for the latest Soap Opera news, spoilers and recaps!

Hey guys. We are building our FB page. Would you please friend us? We will be populating the page over the next few days & will have all things Success Factor X 4 you. @choosehappy365 https://t.co/Sgtl4NmidF #CobraKai #BoldandBeautiful #generalhospital