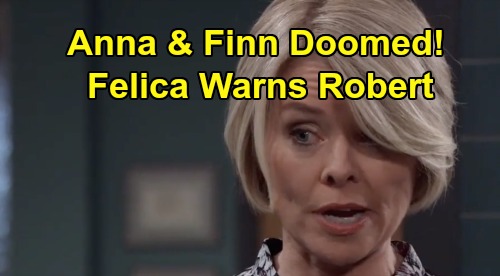 Felicia will head to the PCPD and find Robert Scorpio (Tristan Rogers), who’ll wonder what he can do for her. That’ll lead Felicia to make an admission. She’ll note that she just got off the phone with Anna, who’s discovered a new lead in her mission to find Alex Devane (Finola Hughes). Robert will think that’s good news, but Felicia will have some mixed feelings.

Felicia will think it’s great that Anna’s hunt for Alex is progressing, but she won’t like the fact that Anna will be gone even longer. She’ll hint that maybe there’s something Robert can do about it, but he’ll remind Felicia that he’s been “put out to pasture.” Felicia will understand that Robert has no say in where Anna goes, but she’ll push him to at least try. She’ll be desperate to reunite Anna and Finn ASAP.

When Robert urges Felicia to confess what’s really wrong here, she’ll note that Finn called Anna and pressured her to come home. Robert will think Finn should know that Anna can’t just abandon her mission, but Felicia will protest that Finn misses his fiancée. Furthermore, she’ll seem worried that Anna soon won’t have anything to come back to.

Felicia will think some other agent could take over and give Anna her chance to return to Port Charles. She’ll think Anna’s too close to the case, and that’s blinding her to everything that’s truly important in her life. Anna’s caught up in finding her international fugitive sister and doesn’t seem focused on keeping love alive.

General Hospital spoilers say Felicia will think Robert is missing the warning signs. She’ll suspect that Anna’s absence is taking a toll on Finn and his relationship with Anna. How long will this engagement last if Anna stays away? It could be on the verge of crumbling soon enough. Finn can’t marry a woman who isn’t there! Plus, he’s got all this Hayden Barnes (Rebecca Budig) kid drama to fret over now. Finn doesn’t have Anna to support him on this.