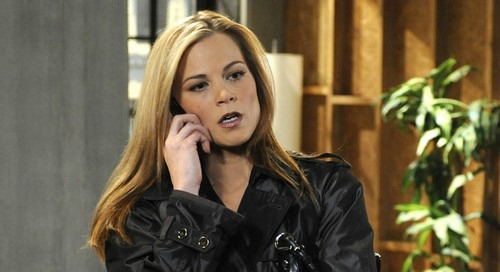 General Hospital (GH) spoilers tease that the perfect Nina Reeves recast could be looking ABC right in their face. After the shocking news came out that Michelle Stafford would be leaving GH to go back to her role of Phyllis Summers on Y&R, the fans on social media came up with a brilliant plan to would make almost everyone happy.

They said that Gina Tognoni (current Phyllis on Y&R) should hop over the GH to play Nina. It would be a casting swap and it would make many fans of both soaps very happy.

There’s no doubt that Gina Tognoni would make a wonderful Nina. She stepped into the role of Phyllis without missing a beat. At first, the CBS soap fans were worried about her not being able to measure up but she did.

Tognoni stunned the fans and CBS with her success. She was able to step into the role and she made the role hers for the most part. Instead of being a likable person with a hint of evil and cattiness, she played her as evil without much heart.

Her shortcomings as Phyllis would work in her favor as Nina. For example, she is often too harsh and rarely smiles. That would be the ideal Nina. However, Phyllis is supposed to be fun, friendly, and sexy – with an evil streak. It was a balance that Gina couldn’t master, so she created her version of the character, which by all accounts, has worked out pretty well.

So, with Gina out of a job, it could be the perfect time for GH to snag her to play Nina Reeves. She could be a great fit for the role.

For the most part, the General Hospital fans on social media seem to agree. Many have pointed out they are okay with Michelle Stafford leaving the role, but ABC needs to act fast to get Gina to play Nina.

Would you like to see Gina Tognoni hired to play Nina Reeves? Don’t forget to come back to CDL later for more General Hospital (GH) spoilers, news, and casting updates!