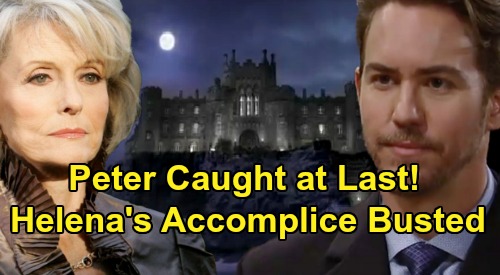 General Hospital (GH) spoilers reveal that Peter August (Wes Ramsey) hasn’t been honest about the extent of his memory-mapping project involvement. Maxie Jones (Kirsten Storms) was able to move past the fact that Peter was Heinrik Faison, the son of the ruthless Cesar Faison (Anders Hove). She found a way to make peace with Peter’s actions. How will she feel when she learns there’s more to his dark backstory?

That’s exactly what Peter will be afraid of as Shiloh Archer (Coby Ryan McLaughlin) taunts him over the past. On August 21, Shiloh will make it clear that he knows far more than Peter realizes. Peter may think Shiloh is just blowing smoke, but Shiloh will have real info that he feels could be quite damaging.

GH viewers will recall how a nicely dressed Caucasian man approached Helena Cassadine (Constance Towers) in that flashback. Shiloh watched out of sight as Helena interacted with an accomplice she viewed as handsome and incredibly valuable. Now that Shiloh has called Peter to Pentonville, it’s easy to see where this is going. Shiloh will likely identify Peter as Helena’s helper and try to blackmail him.

Since Peter’s moved beyond his sinister history, he won’t be eager to stir up additional details. Robert Scorpio (Tristan Rogers) is one of the few people in Port Charles who doesn’t buy this whole nice guy act. He feels like Peter’s a dirtbag who’s going to let Maxie down again eventually. Robert’s view might be a bit extreme, but Peter’s mission to keep things quiet could indeed cause problems.

To be fair, it looks like Peter may plan to tell Maxie what’s going on at first. He truly seems to love Maxie, so he’ll want to continue down this path of honesty. However, General Hospital spoilers say Maxie will get called away suddenly on August 22. That’ll give Peter time to rethink his choice, which means he’ll likely clam up.

There’s been a theme lately about how Peter is a much better man than he used to be. Maxie may soon have to wonder if that’s really true. Once she finds out the rest of Peter’s secrets and realizes he lied to cover them up, it could certainly put their relationship in jeopardy. Without Maxie’s support, Peter could turn back to the dark side. His future is riding on Maxie’s love!