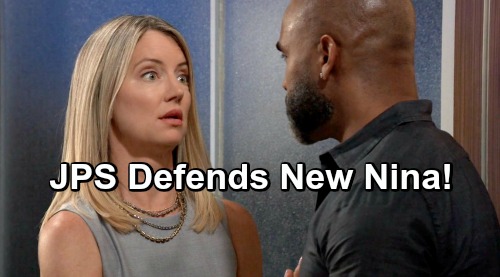 General Hospital (GH) spoilers reveal that James Patrick Stuart (Valentin Cassadine) is speaking out in support of his new costar. Many GH fans know Stuart had a great working relationship with Michelle Stafford. She recently left the role of Nina Reeves and reclaimed the role of Phyllis Summers at The Young and the Restless. Stafford was replaced by Cynthia Watros, who debuted as Nina on June 17.

Plenty of viewers warmed to Watros right away, but others are still missing Stafford’s portrayal. It’ll take some time to get used to the change, but Stuart feels everyone is in for a treat. He’s been nothing but classy throughout the whole Nina transition. Stuart found a way to give Stafford his support and still get fully behind Watros as well.

When a fan mentioned his wife’s meltdown over the Nina recast, Stuart suggested patience. He also made a bold declaration about Watros’ latest stint at General Hospital. Stuart is confident that Watros will blow everyone away with her talent.

“Following Michelle Stafford is no picnic,” Stuart admitted. However, he was added that Watros will settle in and bring the wow factor quickly. “…remember I said this…. She will take over this place,” Stuart insisted. “Within the next very short months, your wife will change her mind. She is sneaking up on you and it’s intentional. Cynthia Watros is extraordinary.”

Watros had a solid debut, even if there wasn’t much to it. To be honest, that’s the ideal to introduce a recast. We didn’t need any explosive drama right off the bat. It was a pretty mundane day for Nina, which let us focus on accepting Watros’ face and style in this role.

Of course, Watros will have a chance to show off her acting skills down the road. She’ll inevitably find out Sasha Gilmore (Sofia Mattsson) isn’t her biological daughter after all. That’ll be big reveal number one for new Nina. The second one will likely be the revelation that Willow Tait (Katelyn MacMullen) is her true daughter. There’s no confirmation on that yet, but the signs are tough to ignore.

Nina and Willow’s feud should rev back up soon, so we’ll see Watros’ take on Nina’s fierce side. If Stuart’s correct, Watros will bring it! General Hospital spoilers say some fantastic Nina action’s ahead. We’ll give you updates as other GH news comes in. Stay tuned to the ABC soap and don’t forget to check CDL often for the latest General Hospital spoilers, updates and news.

Following Michelle Stafford is no picnic. Chip, remember I said this…. She will take over this place. Within the next very short months, your wife will change her mind. She is sneaking up on you and it’s intentional. Cynthia Watros is extraordinary.