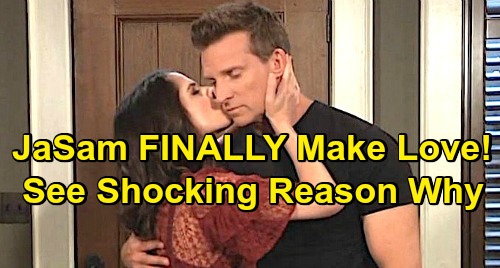 General Hospital (GH) spoilers tease that a long-awaited moment is coming up. Two characters who have been dancing around their feelings for each other are going to head to the bedroom at last. Of course, we’re talking about Sam McCall (Kelly Monaco) and Jason Morgan (Steve Burton). Yes, you read that correctly. Jason and Sam are FINALLY going to make love!

“JaSam” fans were beginning to wonder if this hot reunion would ever happen. Jason has been ready from the second he hit town again. However, he wanted to be patient with Sam and let her find her own way back to him. Jason’s undoubtedly had his fair share of lonely nights. He got a few passionate kisses, but he mostly had to rely on intense staring to get him through this.

Sam has obviously wanted Jason for quite some time, but she wasn’t quite ready to make the leap until now. She had lingering feelings for Drew Cain (Billy Miller) to resolve as well as her own complicated issues. Sealing the deal with a sex session was a big step and Sam needed time to work up to it.

Thankfully, General Hospital spoilers say Jason and Sam will finally get the opportunity to sizzle. They’ll bring that classic “JaSam” chemistry for some much-needed love in the afternoon. GH viewers will definitely want to tune in for all the steaminess.

You might be wondering what officially puts Sam over the edge and convinces her to go for it. There’s a good chance it’ll be an act of bravery. Sam doesn’t approve of Jason’s perilous lifestyle, but she doesn’t mind when it’s for a great cause. In this case, Josslyn Jacks (Eden McCoy) and Oscar Nero (Garren Stitt) will land in grave danger. Jason will have to put his life on the line to save the teens.

General Hospital spoilers say Sam will be on hand to witness Jason’s heroic efforts. She should be reminded of all Jason’s best qualities and fall right into bed with him by the time this adventure’s over. Sam’s feelings for Jason should be stronger than ever once this is all over.

It sounds like some exciting developments are coming up for Jason and Sam. We’ll give you updates as other GH news emerges. Stick with the ABC soap and don’t forget to check CDL often for the latest General Hospital spoilers, updates and news.