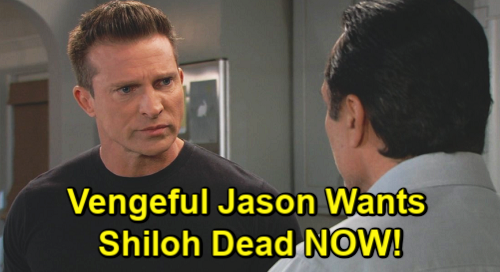 To fully understand Jason’s perspective, GH fans have to remember some painful moments from the past. Jason was unable to protect Sam when Franco Baldwin (Roger Howarth) locked him in a room and forced him to watch something horrific. Jason saw Franco carry a naked Sam to bed and touch her body while she was unconscious. Franco then covered the camera and left Jason to assume what happened next.

Jason was completely helpless to help the woman he loves until Franco unlocked the door and disappeared. General Hospital viewers know Jason could only hold Sam as she cried and tell her what he witnessed. Jason and Sam almost lost each other due to this ordeal, so there’s no way he’s willing to let that happen again.

Getting Away With Sexual Assault

Shiloh also drugged and attempted to rape Sam. Jason managed to save Sam this time, but the DA chose to accept Harmony Miller’s (Inga Cadranel) confession and drop all charges against Shiloh – just like Franco’s charges were dropped. To Jason, another person getting away with sexually assaulting Sam is more than he can take.

Sam went into this to protect not only her sister, Kristina Corinthos-Davis (Lexi Ainsworth), but every other woman who would come into contact with Shiloh and his cult. General Hospital spoilers say Shiloh will continue to assault members until someone puts a stop to it, and taunting Sam makes Jason want him gone now.

Kristina has asked Sonny not to murder Shiloh because she doesn’t want his blood on her hands. However, is it fair for Sonny to tell Jason he can’t kill him? Sam wanted to help Kristina, but she’d already been harassed with emails months before Kristina’s botched initiation.

Shiloh came to town with the goal of targeting Sam, and maybe that’s enough of a reason to let Jason take deadly action. As long as Shiloh is alive and free, he’s a threat to the woman Jason loves. Sam and Jason tried to go the legal route to get rid of him, but that didn’t work. Jason sees that the only way to get rid of Shiloh is to kill him and put him in the pine barrens.

The sooner Shiloh is dead, the better – at least as far as Jason is concerned. Jason wants Shiloh taken care of, and he’s not going to stop until the cult leader’s out of the picture. This issue is personal and pressing, so Jason wants to get the job done.

Sonny wants to protect Kristina, and Jason wants to protect Sam. Should Sonny really make Jason wait to avenge Sam’s attack because of Kristina? With Shiloh’s continued harassment of Sam, is Sonny asking something that Jason simply cannot do?