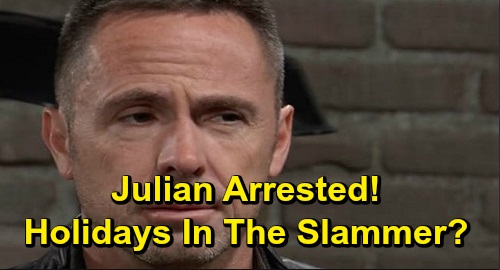 General Hospital (GH) spoilers tease that Jordan Ashford (Briana Nicole Henry) won’t be feeling very merciful as Christmas approaches. On December 19, Jordan will show no leniency at all. Since Jordan is the police commissioner, it’s reasonable to assume this could be related to her job. It sounds like Jordan may want to throw the book at someone, so who might that be?

Julian Jerome (William deVry) is a good option to consider here. GH fans know Julian’s keeping a dark secret from Brad Cooper (Parry Shen) and the rest of Lucas Jones’ (Ryan Carnes) loved ones. He decided to kill Brad by cutting the brakes on his car, but the plan went awry when Lucas wound up behind the wheel.

Harrison Chase (Josh Swickard) pointed out that the investigation results have been inconclusive so far. The car was too banged up to prove anything, but Chase intends to keep digging. He’s hoping forensics will find something they can use to solve this mystery. On December 12, General Hospital spoilers say Chase will discover something important. Could it be a clue that will ultimately point to Julian’s guilt?

Julian doesn’t want to get caught, but he’ll surely admit everything once the jig is up. He’s already battling deep remorse over the situation he put his son in. That remorse will continue as Lucas keeps fighting for his life. It doesn’t help that everyone’s being nicer to Julian than usual. We’ve seen some compassion from Bobbie Spencer (Jacklyn Zeman) and even Sonny Corinthos (Maurice Benard) lately.

The guilt is undoubtedly eating away at Julian, so part of him may be relieved when the truth comes out. General Hospital may decide they don’t want to drag this portion of the story out. If so, perhaps Julian will be the one Jordan is merciless with. She’ll surely want Julian punished to the full extent of the law, so he should face plenty of charges.

Kendra Lennon (Michelle Argyris) died as a result of Julian’s actions, and Lucas is fighting for his life. Brad only had a concussion and some minor rib damage, but he could’ve easily been killed, too. The fact that Julian inadvertently saved Alexis Davis (Nancy Lee Grahn) isn’t going to matter to Jordan. She’ll inevitably view this as her chance to lock Julian up and throw away the key.

Of course, it’s possible GH will hold off on all this a bit longer, but it’d make sense to potentially have Lucas coming out of his coma as the Christmas miracle while Julian spends Christmas behind bars. Will Julian be arrested soon? Will Julian be spending the holidays in the slammer? We’ll give you updates as other GH news comes in. Stay tuned to the ABC soap and don’t forget to check CDL often for the latest General Hospital spoilers, updates and news.